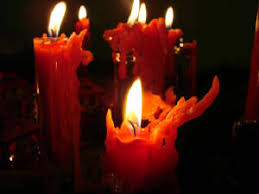 The knocking resonated through the house just as my eyes were closing. Pushing the sound away, I let myself drift and tried not to think about falling asleep, even though it was clearly coming. The knocking got louder, scaring the threads of sleep away and leaving me feeling more awake then before.

Sitting up, I glanced at the VCR’s clock and saw it was four AM. What where the chances that it was just an animal? Or a neighbour doing something? Throwing the heap of blankets and duvets back, I pulled on my favourite fluffy jumper and went downstairs. The front door was directly at the bottom and there was a shadow figure in the stained glass windows.

Running my fingers through my boy-ish short pink hair, I reached the door and unlocked it. Fear was already twisting in my stomach and my heartbeat was echoing in my ears. Everyone knew there was only one person who visited you at this time.

I was still surprised to see the police officer standing there though. He checked my details and added he had some bad news to tell me and wanted to come in. I hesitated. I was alone and even though he was the law, too many weird things had been happening. Still though, I realized, the news he was about to tell me could be the reason behind the problems. I let him in and we went into the living room to sit down.

Your parents have died. They were attacked and murdered by a hitchhiker they’d picked up. Or at least we believe that to be the case. We are thoroughly investigating, but I’ve got some questions I need to ask you. Did they have any enemies or anyone who might have wanted to hurt them? When was the last time you spoke to them? Did they have money or any other troubles? We believe they weren’t just on vacation, do you know what they were doing in Louisiana?

Looking for my brother.

Your brother? Oh yeah, he’s been missing three years now. The case was dropped wasn’t it? On account of no evidence and the fact he was an addict. How long have your parents been away?

On and off since he….This time it’s been about four months.

Okay. Do you have someone I could call for you? Or someone you could go and stay with? I might need to ask you more questions and unfortunately we need someone to ID the bodies.

No. I’m fine and that won’t be a problem.

Closing the door, I felt a blast of cold air coming from the house. Rubbing my face, I padded upstairs and back to bed. There was no way I could sleep now. Turning on the TV, I found a shopping channel and left it on. My head begin to recite the conversation, which already felt like a dream. To a part of me the news of my parents’ death wasn’t new. In a way, they had died alongside my brother on his official missing day. He was already dead by then and we all knew it.

My brother always claimed he could see and talk to ghosts. Our parents had put it down to him being imaginative and a loner. I believed him, at least until the end of my childhood. My parents hadn’t been able to pay for anyone to help him and it seemed they’d stopped caring when he hit his teens. When he became addicted to drugs, it was then easier to blame his weirdness and behaviour.

I glance up at the dull tapping sound above me. It could be anything; water dripping, an animal, a loose pipe. However, I’ve been hearing it too often and now it sounds like someone knocking to come in. The TV flickers and light bulb buzzes. The knocking stops, but I keep staring up at the ceiling wondering if it’ll start again. The chatter of the TV and my breathing fill the room. I scold myself for believing something might happen. Getting up again, I go to the table with my TV on it and open a side draw.

Pulling out a candle, I lit it and go to the window. Opening the curtains, I see the first stains of sunrise across the sky. I place the candle on the windowsill and get back into my nest. I turn the TV off and lay down, staring at the candle and through the window. I think I hear tapping on the glass, but sleep is whispering to me and I just want to forget anything and lose myself to its hazy embrace.

I’ve started to believe him again.