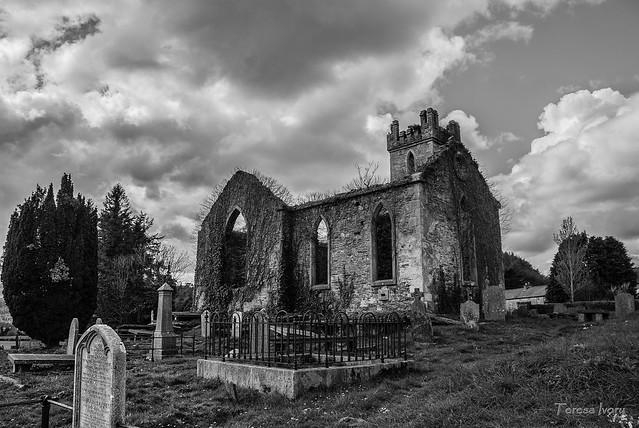 Continued from Church Part 1, which can be read below.

Shutting my eyes I drifted into a deep and dreamless sleep. I wasn’t aware of anything around me and even if I had dreamed, no recall would have been possible. When I awoke, it was only to roll over before arranging the blankets and pillows half-consciously. I fell back to sleep, aware of a light scratching sound of some animal but not bothered by it. No dreams manifested this second sleep and I awoke feeling oddly refreshed and bright.

Stretching out, I saw that the candle had turned into a pool of wax, some of which had run down the desk and created a row of stalactites. I got up, scattering the bedding and walking across the floor. It was cold and rough under me. I dressed quickly, though strapping on the metal breast plate and arm guards took time.

Licking my dry lips, I glanced around for some bottled water or even some food. However, the plastic storage box next to the desk was empty and there was nothing else in sight. Grabbing my sword, I went down into the church. My boots clomped loudly on the stone steps then crunched across the floor. I went around the back of the pillar, close to the large alcove where the grand church organ was tucked into. I was half tempted to let my fingers play across the keys and rung out a hymen. The instrument still sounded good, but I was scared that the noise would alert someone to my presence. Through another hidden door here were the priest’s chambers and the three connecting rooms were small. The first held a desk and chair, signalling that it had once been an office. The second was a dressing and storing room, whilst the third held a tiny toilet and sink.

Going into this last room, I ran the tap, washed my hands and face, before drinking the water. It tasted coppery and slightly earthy. Turning the tap off, I give up a silent pray of thanks and walked back into the church. I felt better, but hunger lay heavily in my stomach and I knew I’d have to find something to eat before I started my nightly duties. Hungry and blood were the worse things about taking a body form, even one that was immortal. They were something that couldn’t be escaped from, no matter what and how you tried. I had long experiment with them and also the emotions that I seemed to gain.

Pulling my outer robe more tightly, I walked out of the church. Opening the door let in the darkening late afternoon light and a rain shower. Looking around, I saw no spirits waiting to highjack me, but I knew they were close. Just like my enemies, spirits good or evil are weak in the daytime, no matter the weather, however they still linger. Setting out, I held my head high and made it to the lichgate without hearing or feeling anything. The abandoned road before me looked long and painful today, but I knew that after some food and the first kill, I’d feel better.

I unfurled my wings, though in this body and on Earth, they were invisible to all but the supernatural. Also, they were not hindered by any material and I had great control of them. I stretched them about, feeling them both heavy and weightless on my back. Every golden red feather was in place and most of their edges looked sharp. I was proud of them, like so many of my brothers and sisters were. Flapping them, I thought about the closest village before kicking off the ground and rising up. I flew much like a swan and swept through the rain clouds and the tree tops, before arriving just outside.

It was a picturesque English countryside village; quiet, with everyone close-net and suspicious of strangers, especially foreigners. However and perhaps lucky for me, there was a retired white witch, Granny Malock, living in the last cottage on the far side. It was to there I now fluttered too and landed at her front door. It was easier to obtain the basics from the more knowledgeable and willing, without drawing unwanted attention and questions from others. Though of course all angels knew how to survive and keep secret, just like the rest of the supernatuals did.

I used the knocker lightly and waited, watching the rain fall softly on the nearby thatched roofs and road. A dog barked down the lane followed by a rumble of tractor engine and low mooing cows. The door opened and the old woman waved me in. She was short, but not bend over or walking hobbled. Her bones were strong, like her mind and spirit. Her long white hair was tied into a bun and she wore a simple blue dress and black house shoes.

‘I’ve not seen you awhile, Blaze,’ she began, ‘did you return home?’

She laughed and led me into the small front room. Two arm chairs and a table were gathered around a newly going fire. A tall bookcase took up the wall to my right and there was a curtained window to my left, which looked out onto the front garden. I took my sword off and sat down in one of the chairs. She fussed around, tidying up some books that were on the table and poking the fire, before asking me what I would like.

‘I need a meal. If it’s not too much trouble and some food for a few days to take with me,’ I replied, feeling the notes of guilt and regret in my voice, ‘I hate asking, but it’s easier this way. I shall have to do something for you.’

‘A ticket into Heaven?’ she suggested, then giggled, ‘oh, I know it’s not you who decides such things, but maybe a good word in the right ear?’

Smiling, she left the room and I heard her walk into the kitchen and began making things. I sighed and looked into the flickering flames. The fire was warm and whiffed the scent of burning wood, coal and paper into my face. Nonetheless, it couldn’t stop the heavy scent that coated the cottage. Dried herbs- parsley, mint, garlic, sage amongst others, battled against one another, more exotic plants and fresh lilies. I breathed it all in and imagined what they all could be used for.

I could have dozed whilst she was away, but instead I got up and looked through the books. There was a mixture of fiction and non-fiction in seemingly no order. I pulled the Legends of King Arthur and the Knights of the Round Table out. It was a favourite of mine, though I could have studied all the world’s legends and myths for years. Siting back down, I flipped through the pages, looking at the coloured pictures and glancing at the words. I drew a comfort and familiarity out of the stories, I guess because I was a knight amongst my kind.

Granny Malock came back with a large tray of food, which looked more like a buffet for a group of people. She set it on the table and told me to have what I liked. Closing the book, I readily ate, thanking her and praising the food too often. She waved it all off. When I had done, she took the rest way and came back with a large basket.

‘Don’t let the rats and mice in that church get to it,’ she said.

‘And really Dear, do you have to live there? I’ve a nice attic room you could have.’

I shook my head, ‘I can’t ask any more of you and anyway I’m fine.’

‘I don’t believe you. That place is such a mess.’

‘I…I feel closer to…home, to Him, there. It’s easier. Please don’t trouble yourself about it. I need very little and seek no comfort.’

She handed me the basket with a little roll of her eyes and a pat on my hands.

We said goodbye and parted. It was still raining as I flew back. After storing the food carefully in the belfry, I left once more and began my duties.