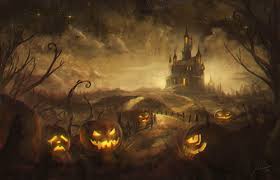 Halloween rolled in on a bank of endless fog. Beth watched it from her bedroom window as she listened to the church bells tolling the midnight hour. Sleepily, she saw the fog reaching out and cloaking cars, lampposts and the whole street in a thick white blanket. Beth rubbed her eyes and wondered if the weather forecast had said anything about fog. She couldn’t remember.

Settling back on the duck feather pillow, she sighed and thought about reading some more of Stephen King’s Pet Sematary, but it wasn’t gripping her enough. How about the TV? Maybe there’d be a horror movie or some ghost haunting show on. She couldn’t be bothered moving and remind fixed on watching the fog clouds rolling by. Slowly, her eyes closed and she thought about all the things she had to do tomorrow.

Celebrating Halloween alone again, she thought and sighed deeply, if I’d know my wild uni nights were going to turn into boring adult times I’d have found a way to stay longer.

In a flash, she saw the party from third year and smiled into her pillow. Her memory replayed disjointed scenes; the childish Halloween style games, all the food, the carved pumpkins on the staircase and that kiss from Blake. A wobble of pain and sadness shook her stomach and she banished that thought away.

She pulled the curtains and rolled over. Settling into a light doze and imaging herself in an empty white room. Sleep whispered to her then carried her off as the fog pressed heavier against the window. A wisp snuck through the not quite closed window and reached down towards her. Beth sighed in her sleep and didn’t feel the fog wisp brushing against her cheek.

The fog was still thick when Beth’s alarm clock drilled her awake. Switching it off, she rolled over and opened her curtains. A fog cloud waved at her then drifted away. Frowning, Beth looked harder outside, she could just make out her small car and that of her neighbours’ across the way. She got up, went through her morning routine before going downstairs in her slippers. She put on a jacket at the front door then went outside.

The fog hugged her and she felt an icy chill on her skin. Peering out, she couldn’t see much further then she had been able to upstairs. Going in again, she went to her computer and looked up the weather forecast. There was still nothing about fog. Deciding to just go with it, she had breakfast and looked over her to do list. Normally her handwritten list was short on Saturdays, but today she had added a couple of things.

Starting at the top, she worked her way through things and soon found herself sorting out the Halloween sweets for tonight. Over the last few weeks, she had been gathering packets to make up goodie bags and now her coffee table was full of stuff. Digging out the party bags, she began filling them with gummy eyeball sweets, lollypops, chews, other gummies and chocolate. Humming along with some Halloween themed music, the task was overall too soon.

Putting the bags into a large green bowl and on to the window sill near the door, Beth went back and crossed it off her list. Next she got on with the pumpkin and when that was down placed it outside and sorted the inners into a two bowls – on for pumpkin pie and the other for pumpkin soup. She checked her list again and got the last few things done quickly, so she could watch a program about Halloween on TV.

The first knock on the front door of the evening made her jump. Beth had been dozing on the sofa in the darkening living room, feeling overcome by her burst of business. Shaking herself, she got up and answered it, preparing herself to see children dressed up in costumes. Instead there was an old woman in large coat.

‘Hi, sorry, but I couldn’t help myself. I hope you don’t mind, but I noticed you hadn’t lit your pumpkin,’ the old lady pointed out, ‘I did it for you. I had a spare candle. It’s fine.’

Beth peered out and looked at the pumpkin she had balanced on top of a large empty tree plant pot next to her front door. A soft light was flicking from inside the orange ball and bring the scary face Beth had carefully carved to life.

‘Thanks. I’d forgotten about it,’ Beth explained.

‘Yes, dear and I’m sure you’d want to keep the spirits away tonight,’ the old woman said.

Beth frowned at the hint of mystery in her voice then put it to one side, ‘yes of course. Thanks again.’

The old lady smiled and left with a little wave.

Beth closed the door, shaking her head as she went back to the TV. Flopping onto the sofa, she looked through the channels and found a scary movie to watch. Just as the first lot of adverts came on, the door was knocked on again. Beth got up and answered it to a single trick or treater dressed as a headless horseman.

Smiling, Beth offered the newly turned teenage boy one of the party bags and watched him run back to his father. Closing the door, Beth knew that was the official start and for the rest of the night, she felt herself yo-yoing to and from the door. Finally as the church bells chimed in ten o’clock she said goodnight to the last group of trick or treaters.

Picking through the remaining goodie bags, she selected a new movie to watch and stayed up to see the witching hour come in. Finally at half past midnight as the movie credits rolled, she turned the TV off and stepped outside to blow the pumpkin’s candle out. Noticing it had already gone out, Beth locked the front door and went to bed.

Settling in for a better night’s sleep, she thought that this Halloween had gone well, but next year she was so finding a party to go to.