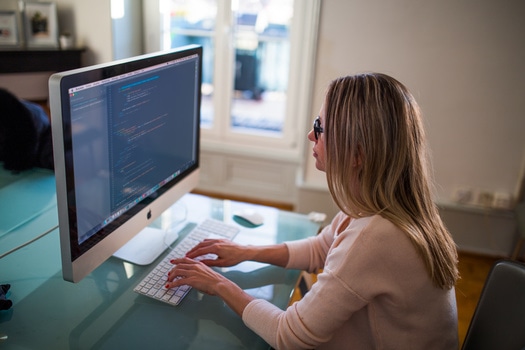 There was a reason Emily Jonesson played dumb as she stood behind the front desk, fluttering her fake eyelashes at her new boss. She smiled sexily, feeling the stickiness of the too thick pink lipstick in her mouth once again. To distracted her self, she twirled a bit of strawberry blond hair that had fallen at her throat.

She watched him closely, taking in the red of his fat cheeks, his thinning black hair and the fact that his bright blue tie wasn’t done up right. Emily  waited as the boss signed in, flung the cheap pen down and stormed off. The door slammed behind him and shouting drifted back to her.

Emily sank into the leather chair and watched through the frosted glass as her boss carried on arguing with someone who she couldn’t see, but was possibly on the phone to someone. Slowly, she picked up the phone next to her and connect it into his office. His shouting voice hit her ear and she listened as he demand a cancelling to some kind of order.

She held her breath and listened hard, but after a few more minutes realised that there was nothing interesting about that call. Hanging up again, she pulled a small voice record out of her black jacket pocket and began mumbling into it.

‘He takes a call at nine twenty, but it seems to be nothing more then a wrong order for printing paper and filing boxes. Seems to be normal. Everything is quiet so far.’

She turned the device off and slipped it back into her pocket. Looking at the computer screen was more, she fixed her boss’s appointments in her head and noticed that none of them seemed out of the ordinary. Scanning through the other programs she had open, her mind wander as to why her actual bosses thought this guy was up to something. Everything looked to be in order and above board.

Tabbing all the programs, she looked down at her diary, open next to the keyboard. The pages were filled with her neat handwriting telling her where and when she need to be. Slotting the pen in, she closed the sparkly pink book that looked more like a child’s play diary and sighed deeply.

‘Soon it’ll be over and I can give up this want to be beauty queen look.’

The door to the boss’s office crashed open and Emily jumped. Quickly, fixing a look of shock horror on her all ready looking shocked face, She stood up and lend over her computer. She watched him storm out, walk past her as if she wasn’t there and go out the other door to the corridor. It banged behind him and Emily felt the vibrations running through her legs.

Yanking out her voice recorder, she made a note about what had happened then pulled out her secret mobile phone and dialled the first of only two numbers that were stored in the tiny thing.

‘He just left,’ she whispered into her hand, ‘I don’t know where he’s going….He’s cleared his appointments for the whole day. I just got the notice now.’

Emily hung up and looked at disbelieve at the message box that had popped up on her screen. Maybe her bosses had been right about this guy after all?