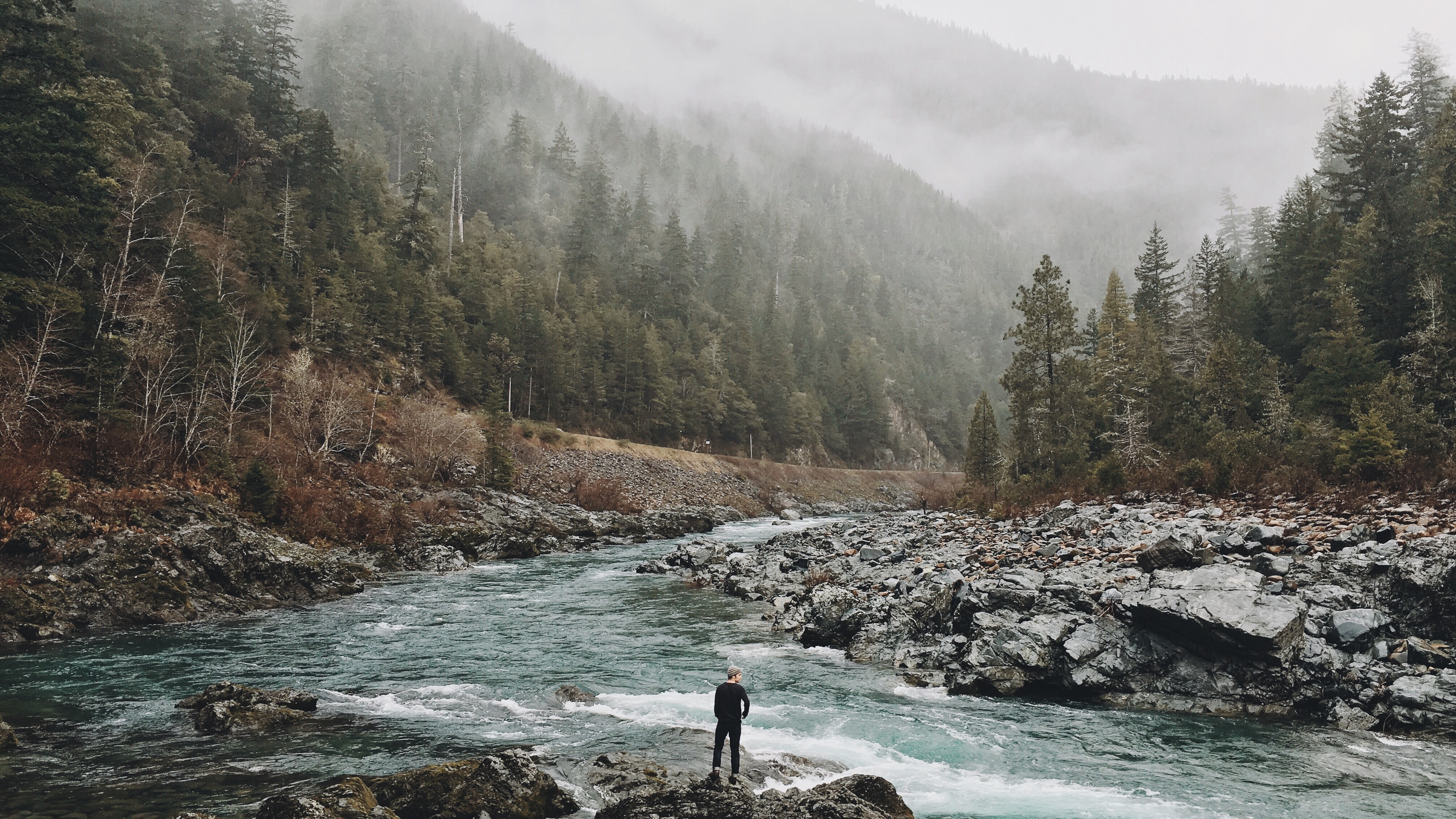 Roy stood on  a large slippery moss covered boulder and looked at the raging river water threatening to splash against his hiking boots and pants. He could see nothing below the foaming white tops and dark blue rapids. He rose his head and took in the scene before him, his eyes and mind still not able to fully take in the magical beauty that surrounded him.

A gentle wind was blowing the early morning mist through the tops of the pine trees, making the landscape before him seem taller then it actually was. Roy could just make out the faint outline of the rising cliffs he had climbed through yesterday as they shadowed out of the low grey clouds.

Roy bent down and dipped his first canteen below the waves. His skin pricked at the cold water’s touch before growing use to it once more. Raising the leather bottle out again, he screwed on the lid and grabbed for his second. A low growling brushed his ears and he froze.

Ever so slowly, Roy eased his head up to looked. Directly across from him, having appeared out of the too close pine trees and scrub was a brown mother bear and her cub. Roy’s breath caught and his heart skipped a beat. The bear was large, but looking thin and her coat was damp with the dew and brush off from the leaves. Her cub couldn’t have been older the two months, he was tiny yet looked identical to her as he nestled against her front leg.

Roy gradually lowed himself to the floor. A few times he paused to stop the rattling of the three canteens at his side and pull up the straps on his shoulder. He felt the splatter of water against him and was thankful for his water proofs. He felt the hard stone against his knees then risked another look up.

The mother bear was still there, watching and judging him, deciding if he was a threat or not. Her cub was yowling, his voice carrying even above the sounds of the raging river. He clearly was not happy to stand still for long.

Roy looked away again, trying to keep his breathing steady and the eddies of panic in his stomach down. A part of him desperately wanted to flee and he weighed up the option of doing that carefully. Would the river make her think twice about chasing me?  It wouldn’t stop her if she decided to. Her cub would be swept away though, there’s no way he’d make it through there. No. It’s best just to stay and wait. If I don’t move, she’ll know I’m no threat. She probably only came down for a drink. The water looks too rough for fishing.

Roy flowed the cresting waves over to the rocky shore and saw the massive claws and paws of the mother bear. The cub was skittering around, playing with the loose stones he was now kicking up. The mother started to move, her black nose sniffing the air greedily. She reached the water’s edge and her cub charged up beside her and almost into the water. The shock of cold against his face brought him to a halt and cried wildly out then snuggled into her leg.

A small smile curled on to Roy’s lips and he wished he had his camera to hand. It was back with his tent and other gear on the grassy nook he had set camp up on last night. He had feeling though, this would stay in his memory a long time. Without warning, the mother bear turned away and began lumbering up the rocky shore. Her cub scrambled after her, crying his dismay loudly.

Roy finally took a deep enough breathe the fill his lungs completely. He stretched his stiff and now aching limbs as he stood. His eyes tracked across the river and he saw the fleeting end of the bears. He took another few breathes, feeling himself becoming totally calm again.

He turned and got halfway back up the boulders when he he suddenly remembered what had been doing. He turned back again and hurried down to the river, his canteens rattling loudly at his side.