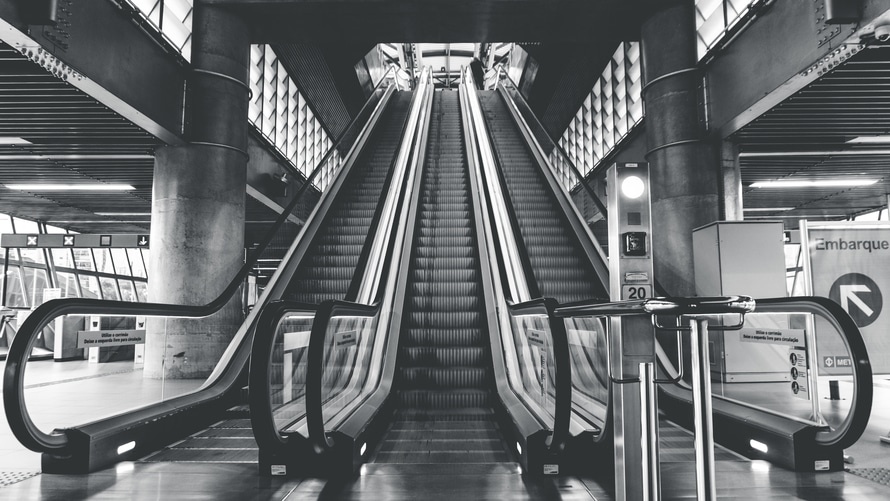 Mini got onto the escalator without thinking as looked at her phone. The screen was blank and the thing would not turn on. She tried holding down the button for a few seconds then letting go, but still nothing happened. Sighing, she pocketed the phone.

Feeling herself being carried upwards, Mini looked across at the down heading escalator. No one seemed to be on it. Thinking that was odd, she looked over her shoulder and saw a flow of people walking the street. She could not hear their voices or their footsteps though.

Turning back, she looked upwards and realised she was alone. Shrugging and trying to think nothing of it, Mini got out her phone again. Turning it over, she went to undo the back of it, but her feet lurched, threatening to throw her downwards. She gripped the hand rail and steadied herself. Letting go of the breath that had caught in her throat, she glanced around to make sure no one had seen that then shook her head.

Getting back to her phone, she poked her finger nails into the small outline at the back and tried to flip the cover. It didn’t seem to want to give. Trying again, she dug her nails in and pulled up. The back panel give way slightly. Tutting, she glanced upwards and saw the escalator still had a way to go.

Mini turned the phone the other way and wrestled the panel off. Placing it under the phone, she started taking the memory card, sim and battery out. Juggling all the parts, she then fitted them in again, but they did not seem to want to go back in. Letting out a growl and wonder why it always had to be her, she jammed the battery back in then went for the sim.

The tiny, thin card slipped from her fingers. Letting out a gasp, she bent down and scrambled after it. The sim landed on the step behind her and Mini followed it. Picking it up, she looked around, worried someone had just seen that. However, there was still no one there and now the people on the street had all but disappeared.

Mini straightened, put the sim card back in and placed the memory one next to it. Slotting the back panel in place again, she turned the phone over and on. Keeping her eyes glued to the screen, she felt the vibrations of the escalator still under her feet. The screen blinked on. Smiling, she looked about again.

‘What’s going on?’ she muttered.

Switching her frown to a smile, Mini wondered if she had missed an out of order sign or if she was just being paranoid. Something was bugging her though and she had never known these escalators to be empty like this before. The beeping drew her attention and she looked down at her phone.

The battery was dead. The phone went off.

Letting out a desperate cry and putting the phone into her bag, Mini fought to rein herself in. Calming her breathing to almost match the steady movement of the escalator, she shut her eyes. For a few moments, she thought she was floating upwards and that idea helped to calm her more.

Opening her eyes again, she saw that there were now three escalators. Confused, she looked harder, trying to disprove it, but there was another downward heading one next to the original.

Have there always been three? she wondered, maybe I just never noticed before?

Puzzling, she watched the third set of moving stairs trundling downwards. Deciding that her lack of attention must be to blame, she looked up again. The metal, grill steps stretched before her, seemly never to end. Though, they must do at some point. Mini fell into wondering if they had always taken so long then she was pitched forward.

Scrambling to steady herself, Mini tried to reach for the handrail, but it seemed to grow taller and out of her reach. Panicking, she prepared for the impact, but it never came. Instead, the escalator seemed to fall with her. A loud whistling went off in her ears then disembodied voices suddenly filled the silence she had been in.

Mini covered her ears, the sound so violent to her. Trembling, she tried to get to her feet, but she seemed unable to as the steps had now flattened to one straight line and were hurtling downwards. As her brain tried to work out what was happening, Mini dropped her hands and tried to touch any part of the escalator. Some kind of barrier was stopping her though.

She tried to focus in on the disembodied voices, but she could not figure out what they were saying. It was like the roaring sound of a waterfall, you could hear it, but not pick anything out from it. Mini tried to stand again and this time made it. She looked around, but she seemed to be in some kind of empty space, just made up of different colours.

Mini dug her phone out, thinking to call for help. The screen was still blank and the device did not want to turn on. Wondering what to do, she noticed the other two escalators had also become flat along side her own, but they were both going in the opposite direction.

An idea came to her.

Taking in a deep breath and not thinking about it any further, Mini threw her bag over the railing and onto the original downward heading escalator. Scrambling over after it, she was glad she’d worn pants today. The handrail, squealed under her, but then she was over and chasing after her bag.

Grabbing it, she clutched it to her and let the moving stairs carry her back again. Soon they de-flattened out, becoming normal again. The metal grill steps rose around her, inviting her to go down them as they formed. Mini took a few steps then stopped. The other two escalators were also reforming as if nothing had happened.

Breathing deeply, she willed this craziness to be over some how. Mini shut her eyes, dragged in deep breaths and hugged her bag harder. Opening her eyes again, she saw a slice of yellow light and the blurry movement of people.

Not looking back or in fact anywhere else, she kept her focus on the light and people. Finally, she saw the street level again and unable to wait any longer, she hurried onward. Stepping off the escalator, the street was bright and welcoming. People hurried on their ways, talking loudly and seemingly ignoring her.

Mini heard a clicking noise. A part of her wanted to turn, but the other part of her did not. Clutching her bag still, she peeked over her shoulder and saw the escalators has stopped. Turning fully, she saw the out of order signs sticking out of and around the moving steps.

‘Explains why no one else was using them…’ Mini said under her breath.

‘Ya okay there, love?’ a strange, male voice said at her elbow.

Mini looked over and saw a beast of a man wearing a yellow high viability jacket and carrying a huge tool box.

‘Yeah, erm….it’s broke,’ she replied then realised how dumb that was.

‘No I mean…’ Mini trailed off and looked upwards.

She could clearly see the top of all three escalators and the floor they were attracted too above.

‘Huh?’ the man scratched his head.

‘What? No, no,’ Mini spoke, she shook her head quickly and began backing away.

‘Stairs are there,’ the man pointed out.

Mini bit her lip, give a nod of her head and turned away. Starting to walk though, she stole some glances over her shoulder and watched the men began their task. Her mind thundered with unanswerable questions, what an earth had just happened?