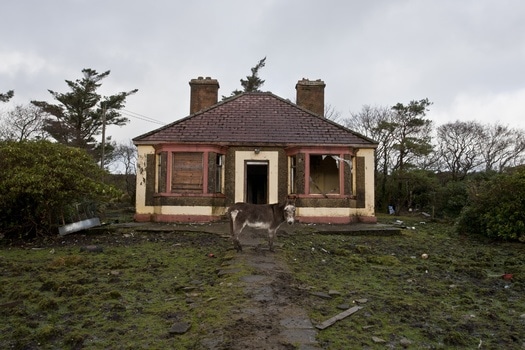 Kez didn’t like the unfinished and abandoned house at the end of the lane. Yet, it haunted him. There was just something about all the stories that surrounded the house and the way it looked rotting away. Even though it was unassuming, there something totally off putting about it. Maybe it was the torn up grassy front garden, the half boarded up windows, the open doorway that looked like a dead mouth…

Whenever he went passed it, Kez would always stop. He would peer over and through the overgrown hedges and bushes to look at the mysterious house. Today though, he felt there was something different the place. He looked into the garden and saw the rotting house. The roof tiles hadn’t fared well in last night’s storm and some were broken on the ground. He saw a flicker of movement and looked closely. Was that a person hiding at the side of the house?

Whatever it was moved and began to take more of a form. It took Kez a few seconds, but then he realised it was a donkey. The brown and white animal plodded across the grass and came to stand before the abandoned house’s doorway. Kez frowned, how had a donkey gotten in there?

Maybe, he thought, it had escaped from a nearby field? The house was boarded on three sides by farmland and it would have been easy for a donkey to push through the hedgerows to get in. And now it’s trapped in there, Kez trailed off the line of thought. He watched the donkey for a few more seconds then left the animal nipping at an over turned grass clump.

Someone would come to get it soon, Kez thought as he walked away.