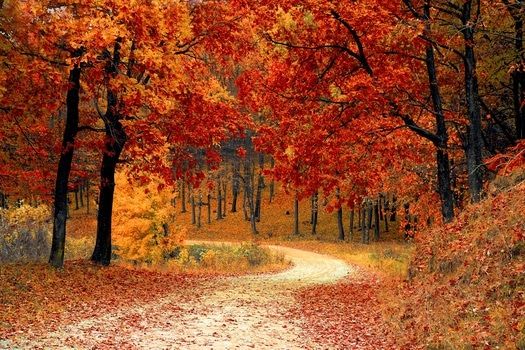 She wanted to go outside and walk through the falling leaves. She wanted to feel the wind full on her face and smell all of the earthy, autumn scents. Seeing everything from her window or the screen wasn’t the same. She needed to physically be there.

This bed, this room, was her life now. She had no body, she was just a mind trapped within a rotting shell. And how much longer would she have to wait to be free? No one could tell her that.

She looked out of the window and tried hard to smell the nature. But someone had lit incense sticks again that was the only thing she could smell. She was sick of that and the scents of candles and flowers. She understand why they did it now; not to comfort her, but to comfort themselves from the hospital smells and her decaying flesh.

She longed for it all to go away and for her just to be outside walking barefoot through the woods. She shut her eyes and thought about the wind in the trees and the singing of birds. She could touch the tree trunks and walk in streams and mud, just like she use to do.

It felt like she would never go. Perhaps, that was her curse? To just carry on like this forever and each generation of her family having to care for her and go through the same emotions. Maybe, they’d get bored and just sign her care totally over to the hospital. Then either they would store her away in a freezer or some scientist, crazed with frame would find a cure and she could go outside again…

She wanted to know why it had happened to her. She must have done something wrong and being punished. But that didn’t make any sense. She had been good to the world, unlike so many people. She had chosen a quiet, animal and world friendly lifestyle. She had meditated, eaten right, helped everyone when they needed it and had never been selfish or needy herself. Surly that was how humans should be? Why would someone as good as her be punished with this crippling sickness?

She was too tried of trying the figure that out. It was something she tried to keep at bay, but with only her thoughts and imagination still in use, it was hard for her to keep away from that line of thought. Sometimes she would reflect on what the doctors, nurses and her family were saying, but most of the time it was the same things over and over again. It was easy for her to mute their words now, though she desperately craved them.

She looked at the window again and knew if she could cry she would do. When would she be back in mother’s natures arms and free of this hell?