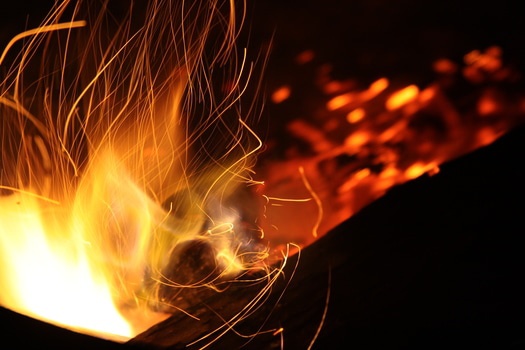 Godson stood at the edge of the burnt grass and looked over what remained of the church. There was a lot to see, but also very little. He sighed deeply and wonder why people did what they did.

Huddling into his thick red Parker coat against the late autumn wind, Godson stepped on to the blackened ground. The dead grass crackled loudly under him, just like the fall leaves. He took a deep breath and smelt smokey, earthy air. Even though it had rained in the early hours of the morning, the scent of the fire was still strong.

He came to a large stone, the first of many scattered around. Inspecting it, Godson tried to figure what where it had come from. Maybe from the door arch or one of the windows? It was impossible to tell. The stone had a large black scorch mark across one side. The fire must have been raging hot.

Godson moved on towards what had been one of the front windows. He spotted something and knelt to pick it up. It was a shard of red glass. He rubbed it between his fingers and straight away he could see the stained glass window that had been just above his head. He looked for more glass, but couldn’t find any bigger fragments.

Slipping the glass piece into his pocket, he walked fully into the church ruins. The floor was still mostly in attached but covered with soot, burnt things and fallen stones. He walked carefully over it all and towards were the alter had once been.

‘What devil compels someone to burn down a small community church?’ Godson said a loud.

He balled his fists and gritted his teeth. The anger that he had been trying to subside was rising. A small part of him had been hoping there’d be something left, but now it was clear there was nothing.

The smell was worse here and it felt like the smoke was clogging his lungs. He coughed and had to turn away. He had to leave. Even though he didn’t want to. Perhaps, under all this destruction was something that could be saved?

It started to rain again and Godson give up. He walked back out of the burnt church and to his car. Getting in, he sat looking over for a few moments then drove home.

Days later the police report came through. Godson sat at his desk and read it. A gang had actually been stealing the brickwork, wires, roofing and in fact everything they could get there hands on, just before the fire had started. It seemed they might have caused it and so far the fire bridge had said it was accidentally. Not the news Godson wanted to hear.

‘I won’t rest till this is solved,’ Godson muttered, ‘God. You must help me to bring to justice the people who did this.’

Falling into prayer, Godson saw the image of a burning church in his mind. Somehow, he knew the answers he seeked where there still.