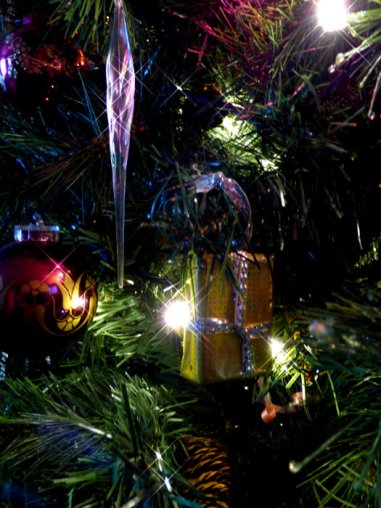 It had been a struggle, but finally, Macy had brought her last Christmas present. Laying spread eagle across the sofa and catching her breath, she heard the muffled sounds of Christmas songs coming from a neighbouring apartment. She tried to guess the song and though it’s tune was familiar without the lyrics she couldn’t recall it.

Getting up, she left her shopping next to the coffee table and went into her bedroom. In a large grey plastic moving box in the far corner the rest of her presents were stored as well as wrapping paper and cards. Macy picked it up then decided to drag it into the living room.

Putting a Disney Christmas movie that she had seen countless times into the DVD player, she began wrapping up presents, labelling them and writing cards. The sound of the movie blocked out the muffled music, but Macy wasn’t watching movie anyway.

About two hours later and Macy placed the last present into the box. Sighing, she collapsed on to the sofa. She shut her eyes and dozed for a few minutes. Then stirring herself awake, she dug out a list from her pocket. Unfolding it, she went through the names, the gifts and the ticks. Everyone and every gift had been brought.

It’s really finally over, she thought, not fully believing it.

Macy looked at her small Christmas tree which was twinkling in the corner. There were a few presents under it all ready. Soon though, she’d be packing them with her clothes and other stuff to go to her parents for the Christmas weekend. She might have only moved out a few months ago, but with her new roommate gone home all ready, Macy didn’t fancy Christmas alone.

‘I should double check,’ Macy spoke aloud to herself.

Finding a pen, she went through the people and presents, making sure to double tick them off the list.

‘Yep, all done. It really is over,’ Macy said, ‘and now I can totally enjoy Christmas.’

7 thoughts on “The Last Present”