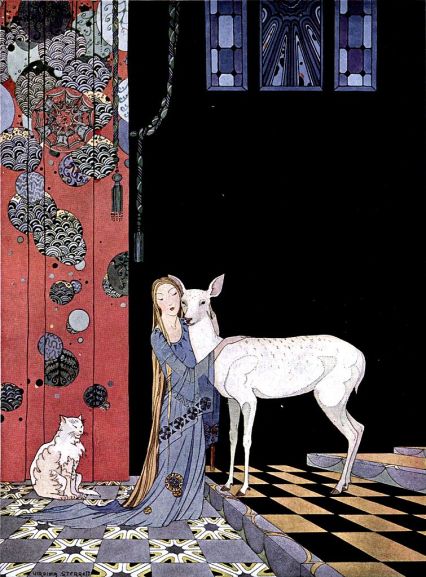 The High Priestess had heard the crying at the temple door for some time now. She had been hoping that one of The Sisters Of Syreth,  her followers, servants or anybody else taking shelter in the temple tonight would have opened the door by now. Wondering why that was, the High Priestess swished down a connecting hallway in her large and heavy blue dress.

Going through a small door, she entered and passed through the huge nave down a side corridor. The air was heavily scented with hot wax, incense and winter flowers from the mountain sides. Flickering candle light glowed from clustered candle groups, but it was not enough to keep the shadows away. A handful of people were sitting in the large, cold wooden pews. Most were silent in prayer or sleep, but every now and then sobbing, moans and whispered voices could be heard.

The High Priestess stuck to the shadows and hurried past. It was late in the night and she had all ready given a long service this evening then spent time with a number of different people. She was tried and had been trying to fall asleep, but the crying had disturbed her.

Going through the large doors into the small welcoming area, she saw the door opposite which led to the porch was all ready open. Voices and light were drifting from the area. Not bothering to be quiet she walked on and came to a stop behind a small group of people. There were five of them; two Sisters of Syreth in there pale blue robes, a male servant and a tall man dressed in a travelling cloak.

‘I am telling you, do not let them in!’ the man was saying.

‘Everybody is welcome in this temple of Syreth. She is the Goddess of protection and guardians. It is our duty to offer whatever we can to anybody who comes to our door,’ the High Priestess broke in.

The two Sisters turned and did little bows. The male servant, who was holding a lantern bowed too, but his was a lot lower. The traveler did not move and the High Priestess saw the tiredness and worry on his face. But he was also trying to mask his fear. Behind them all and coming from the other side of the temple’s double front doors the loud crying continued.

‘What is it? Who is crying out there?’ the High Priestess demanded to know.

There was a pause then the traveler spoke out, ‘creatures. I saw them on my way here and I think they followed me. You must not let them in for surely they are demons.’

‘What do they look like?’ The High Priestess asked.

‘There is two of them,’ the traveler replied, ‘one small, the other tall. They look like ghosts to me. I heard them whispering and calling out to me. But I did not stop. I rushed here and closed the door upon them and since then they have been crying,’ the traveler explained.

The High Priestess fell into thought.

‘We want to open the door to see for ourselves,’ one of the Sisters spoke.

‘Perhaps in the darkness the gentleman was mistaken,’ the second Sister finished.

‘I am not blind! I know what I saw!’ the traveler snapped.

‘Of course,’ the High Priestess murmured, ‘please see to his needs,’ she said to the servant.

The servant give a nod and led the man away. The traveler began to mutter under his breath, but he followed the servant and the steady lantern light.

The High Priestess went to the door and opened it. She peered out then stepped aside.

A strong winter wind blew harsh snowflakes into the temple and set the candles flicking violently. Coldness seeped in and snatched what little warmth there was within the stone walls away. The sound of the river gargling and the rattling of bare tree branches echoed through the temple.

The crying stopped. A large white and light brown cat padded inside followed by a pure white young female deer. Snow dusted their coats, but they seemed unharmed.

‘Do you seek shelter here?’ asked the High Priestess.

‘Yes,’ the cat spoke in a clear voice that was not male or female.

The two Sisters gasped and backed away. They reached for each other, holding hands tightly. Fear passed across their faces, but they did not run away.

The High Priestess shut the door. Snowflakes were melting in her long loose blonde hair and the wind was tugging at the edges of her dress like a naughty child.

‘You are both welcome here,’ the High Priestess continued.

‘Thank you,’ the cat replied.

‘What are your names and how can we help you?’

‘I am known as Horven, the druid,’ the cat spoke, ‘and she is the Princess Graceuvial.’

The white deer nodded and seemed to give a little bow with her long neck.

‘A Princess?’ The High Priestess breathed.

‘We have become lost in the snowstorm,’ Horven added.

‘Yes. It is quite a bad one,’ the High Priestess responded, ‘please let me take you to some warm rooms. There you can rest and I shall see to it you have everything you need.

The High Priestess held out her hand then led the way into the Temple.

17 thoughts on “The Visitors”