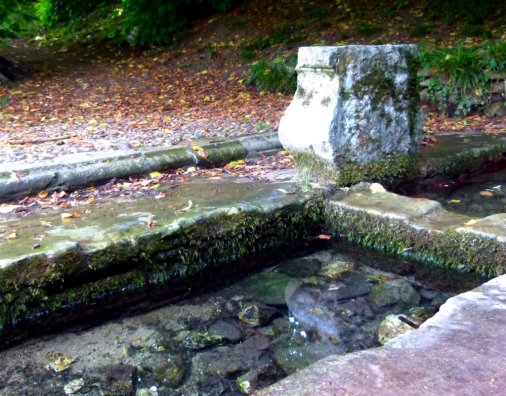 It was the first time Shell had been outside since early autumn. Strangely, everything looked the same; there were leaves on the ground, the trees were bare and clear water was still running in the man made stream. The air felt cold and wet, yet fragranced  with freshness.

Shell breathed in, held it then on release heard the crackling of a cough in her lungs. She tried to hide it, but the cough burst from her like popped ball. She clutched her chest, feeling the tightness growing. She bent over, unable to do anything other then let the coughing fit hack through her body.

Flopping down on the wet grass, her simple dress collecting about her, Shell rubbed her chest and tried hard to catch her breath. She glanced back at the remains of a castle. The light grey stone walls and roofs rose above the brown branches of the tree tops. She had been trying to get there but defeat was creeping in.

Pushing herself up, she went towards the stream and sat down by it. Even though Shell knew the water would be freezing, she scooped up handfuls and drink deeply. There was a few minutes of peace and then another cough tickled up her throat. Giving in to it, she let this cough out.

It was worse then the one before and tears started in her eyes. Sniffing, she wiped her face and made herself look dignified again. Struggling to her feet, Shell walked back though the woods. Glad no one had seen her.

Slipping inside the cottage’s back door, she went up the two flights of stairs and into her attic bedroom. Shell sank down on to the bed and looked around. Someone – her old handmaid probably- had cleaned the room she had just spent the last four months almost dying in.

The windows were open, letting in the early spring air and there was a vase of just budding flowers on the window sill. The bedding had been changed, the floors scrubbed and the fire place clean. There was nothing to say the place had almost been a death chamber.

Shell turned to the window. She couldn’t see the castle from here, but she could feel it. Her home was always close in her mind. She sighed and didn’t let the memories build up. It was time to bury them, just like she had her parents and grandparents.

There was a knock at the door, but before Shell could call out the door opened. Her handmaid walked in carrying armfuls of clothes. the woman was short, busty and getting in late age.

‘Oh! You have returned. I’m sorry. I’ve just brought you some new dresses. Would you like to see them, your highness?’ the maid spoke.

Shell shook her head and let the woman put the clothes away in a roughly made wardrobe.

‘Did you make it to the castle?’

‘Another day then. Shall I bring you some tea and cake?’ the maid asked.

Shall paused and patted her chest, feeling another cough building, she squeezed out a ‘yes, please.’ Then coughed loudly. she tried to make it seem like she was only clearing her throat, but they both knew better.

With a little bob, the maid left and Shell spent a few moments catching her breath. After, she got up and went to the window. Letting her thoughts roam, she thought about all the times she had dreamed of being Queen and now she really was, she didn’t want it.