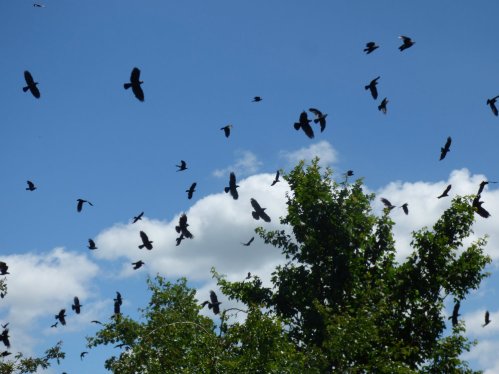 They circled as one giant black mass. Blocking the sky and the sun out, causing darkness to fall. Everyone stopped what they were doing and looked up in wonder. Then the birds began dropping like stones. Their lifeless bodies hitting roofs, cars, pavements and people.

Panic raged across the country. Everyone hurried to find shelter, whilst grabbing phones to take photos, footage and to call others. Cats and dogs went crazy trying to catch the dead birds but soon even other animals realised that something was very wrong.

Hours later, the bodies of all the world’s birds lay piled up on the ground. All countries had declared an emergence and everyone was either being told to stay home or if they were needed to come in right away.

No one could work out what had happened but one thing was for sure Earth was now in great peril.

(Inspired from; https://scvincent.com/2017/06/08/thursday-photo-prompt-wings-writephoto/ with thanks)