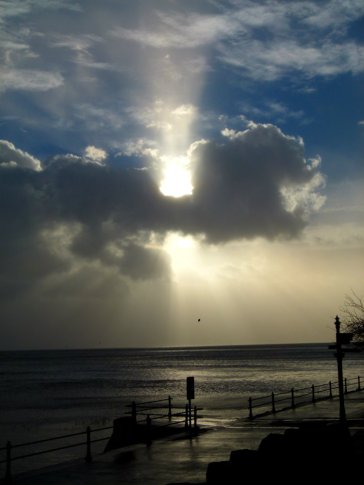 The storm was fading and the sky looked peaceful once more. Casey had her doubts though. This suddenly burst of autumn weather wasn’t to be trusted. She pressed her head against the wall and looked through the collection of rain drops on the window. She could see a hazy outline of the sea and the docks. Working boats rocked on the still violent waves.

Casey’s fingers curled the corners of the book resting against her drawn up knees. It had been a day like this, five years ago, that she had lost her family on. They had taken their boats out to drag in their nets before a storm had hit. Casey had been ill and had to stay home which had saved her life. Though some days, she wished things had been different.

Turning away from the window, she looked up above the fireplace in which a fire was burning brightly and wrapping warmth around her. A painted portrait of her family hung there, dating back eight years or so ago. There was her mother and father, dressed in their Sunday best clothes and not their working clothes which Casey always remembered them in.

Mother was smiling, happy to be doing something exciting. Her curling blonde hair was down and she looked years younger. She was also holding a blanket wrapped baby in her arms which if Casey recalled was her sister Rose who had died at a few months old. Father looked the opposite of mother, he looked stern, proud and a lot older then he actually was because of the hard life he led.

Four children stood in front of them; three boys and a girl, all dressed in their Sunday clothes too. Casey avoided looking at her eight year old self and focused on her brothers. She whispered their names under their breath, ‘Will, Luke and Tom.’ They looked excited and trying to stay still, though it was hard. They had pretty much grown up into young men the last day she had seen them.

Casey turned back to the window as she heard a low rumble of thunder. A new storm was starting up and the sky was becoming dark once more. Rain splattered the window then began falling down in sweeping pattern. The lighting flashed and Casey’s fingers tightened on the book so that the corners and edge left an imprint in her palms.

There was a knock at her door. She let the book fall from her hands then closed it and slide it under a cushion of the window box. The door opened before she had time to invite the person in. Her uncle’s large framed filled the doorway, his stomach almost bursting out of his white shirt and green waist coat. He smiled at her but then began frowning as he walked across the room.

Casey stood, smoothing out any folds or wrinkles in her long blue and white dress. She clasped her hands and tried to look calm but nervous were over welling her. She give her uncle a bob of respected then avoided looking at him. Not because she feared him or was embarrassed, it was because over the last year her attitude towards him had changed.

‘I hope this dreadful weather clears for your wedding tomorrow,’ he spoke in a gruff voice.

‘I hope so to, uncle,’ Casey uttered.

‘The final preparations will be done this afternoon.’

Casey stole a few glances at him, he seemed to want to say more but was holding back.

He would still rather have wed me off to someone else instead of his son, Casey realised.

‘You will join us for dinner,’ her uncle spoke, ‘some of the guests have already started arriving. Your lack of presence will be noticed if you don’t.’

He shot her a disappointed look then with a sweep of his long black jacket, he turned and left the room. The door clicking shut behind him.

Casey folded into the window box. Holding herself and trying not to cry. Outside the wind howled and threw rain at the window whilst sea waves bashed into boats and the shore. She looked out trying to distract herself but her eyes were drawn somewhere else.

‘This is all your fault,’ Casey whispered looking up at her family portrait, ‘if you had not all died then I would not have to marry my cousin.’

Casey pressed her head into her knees and took some deep breaths. Even though her life was about to change dramatically from fisherman’s daughter to middle class man’s wife, she refused to let her true self fade away.

(Inspired by; https://scvincent.com/2017/09/07/thursday-photo-prompt-fading-writephoto/ with thanks.)