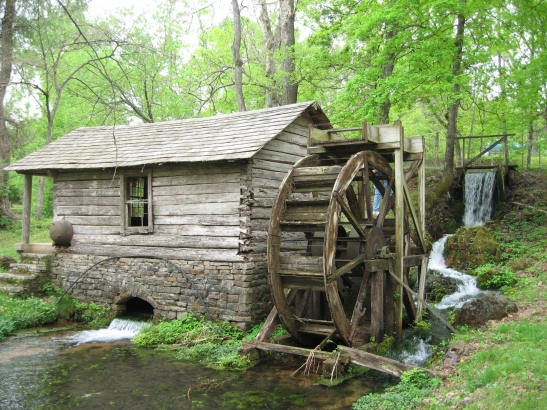 Fairy lights twinkled in the single window of the cabin, like a beacon through the trees. The sounds of a small river racing over a waterfall and turning the old wooden wheel at the bottom echoed in the pause I had made. The snow lay thick on the ground and trees, giving everything a white coat like icing on a cake. The sky above was dark blue, nearly black with the promise of nightfall and more snow to come.

I carried on walking, my boots crunching on the snow and making a trail of clear footprints. My torch provided a small circle of light with which to guide my eyes with but I knew this forest so well that it didn’t matter. I carried a few logs under my other arm, cut from a dying tree I had knocked down a few days ago. Shifting the heavy bag on my back, I climbed the slope upwards, towards the cabin.

It had once been an old sawmill which had kept a now long lost village in some industry, but now it was my home. Reaching the front door, I kicked the snow of my boots and went in. I didn’t bother locking the place unless I was away for a few days; there was no one out here and not much in there to steal.

Opening the door, my old dog woofed and wobbled over to me. I patted him then closed the door and went to the fire. The wood was low, so I put some more logs on and watched the flames grow back to life. The dog joined me, curling onto the rug. The electrical lamps above flickered but held their dim light. I took my bag off and laid it with my axe next to the single cold bed.

Warmed by the fire, I took my boots off and sat in the single chair. The fairy lights looked merry in the window but were a sad reminder of the past. I hadn’t always called this small wooden cabin home… At least I wasn’t outside in the snow, frozen. Getting up again and keeping myself busy, I emptied my bag and made something to eat.

Catching anything in winter was hard, but rabbits and smaller creatures could be tempted with a bit of food. The water in my canteen had turned solid, so I had to place that close to the fire and wait. The dog snored loudly and woke a few times, I shared my meal with him. Then after adding more wood to the fire, we both got into bed.

Once I’d had a wife and children. We’d lived in a bigger cabin then this but then there had come hard times. One day, my wife took the children into town and sold them. She told me we could have more when things were better again.

I had my axe in my hand and felt a rage I had never known before consume me.

There’d been no other choice but to run away. I had lost everything but my freedom and that was something man of the wildness could never give up. I now lived the life of a hermit, selling whatever I could to whoever I could and hoping to live out the rest of my life in quietness with my happy memories of the past.

(Inspired by; https://mindlovemiserysmenagerie.wordpress.com/2017/12/10/sunday-writing-prompt-232-its-all-in-the-title/ with thanks).

2 thoughts on “The Old Sawmill”