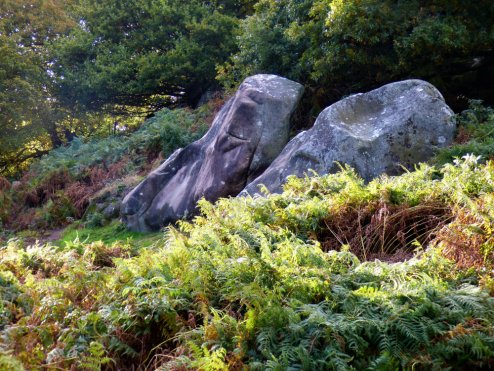 Alice knew she looked a mess but in that moment she didn’t care. Pressing her back into the rock she was resting against, Alice cried harder into her hands. The ferns and trees muffled her sobbing and protected her from curious eyes. Letting it all out, she wondered how things had gotten this bad.

Taking deep, shaky breaths, she wiped her face then rubbed her hands dry. She sniffed loudly and dug around her little blue handbag for a tissue. Blowing her nose a few times, she crumpled the tissue up and dumped it back into her bag.

Looking around, she admired the view of forest, letting nature distract from her depressive thoughts. The dark green ferns were growing in wild clumps, reminding her of dinosaur movies and the large trees were letting dappled spring sunlight in. The rock she was resting on felt cold and rough. She reached out and touched the rock’s companion who was just as cold. Millions of years old rocks seemed beyond belief but here they were and so was Alice.

The sharp barking of a dog drew her attention. She looked quickly around but the forest was too dense. Something broke through the trees and Alice saw a massive grey dog coming towards her. She tried to move but her back hit the rock hard and she cried out. Alice stumbled away, hand trying to rub her back and at the same time trying to keep her balance. She failed and fell sideways into the ferns.

Crying out even more, Alice struggled to get back to her feet. The giant of a dog appeared above the waving ferns and peered down at her. Alice stopped moving and held her breath. The dog was sniffing with a big black nose and paws the size of tea sauces were stomping down the ferns in attempted to get to her.

A scream ripped out of her before she even meant it. The dog stopped, stared in panic and backed off quickly. Alice gasped for breath and pressed a hand to her chest. Pushing herself up, she saw the dog standing some distant away but still watching her.

‘Duke! Duke!’ a man’s voice shouted from the other side of the trees.

The dog turned towards the voice, tail swaying.

The dog give a single bark and sat down, sad looking eyes studying Alice.

Staying still and hoping the ferns hid her from sight, Alice watched a man dressed for hiking enter the clearing. He approached the dog, fussing over him. Alice saw the dog was so tall that he came to the height of the man’s hips and the man just had to reach his hand out to pat the dog’s large head.

A fern branch snapped and Alice’s eyes shot to the man’s.

‘Oh my god,’ he half shouted as he rushed over to her, ‘are you okay? What happened? Did Duke scare you? Was that your scream I heard? I’m so sorry,’ he gushed, his words tumbling together so that Alice struggled to understand them.

The man pulled her up and out of the ferns before she could reply. Alice felt her cheeks getting hot and avoiding his eyes, she dusted herself off. She knew how odd she must look to him. He was dressed to be out here in boots, water proof pants, t-shirt, fleece jacket and rucksack. In stark contrast, she was dressed in a business suit; black blazer, white blouse, black pencil skirt, black tights and black flat shoes.

‘He wouldn’t have hurt you, honest,’ the man was babbling, ‘He’s a big baby. Scared of his own shadow. Typical, great dane. I’m so sorry. Are you hurt?’

She looked up at the man and had to fight down even more shock. He was ruggedly handsome with longish sandy colored hair, a matching stubble beard, a nicely angled jaw and cheeks, he had shimming blue eyes and soft kissable lips. Was he a fallen angel? Alice had forgotten how to breath.

‘Then…then is there anything I can do?’ the man asked.

Alice had the impression he was taking her in for the first time and wondering why she was out in office clothes with a tear stained face and her mud colored hair tumbling about like she’d been hit by a hurricane.

The man took his rucksack off, dug around and came out with a thermos. He unscrewing the lids before pouring hot tea into the cup and giving it to Alice. She accepted it gratefully and warmed her hands on the hot metal whilst watching the steam floating upwards.

The great dane yawed loudly as if with bored of this whole ‘saving the damsel in distress’ scene. He laid down, sprawling in the grass and shade of the ferns, looking as harmless as the rocks next to them.

The man nodded, I’m Kipp. He’s Duke,’ he said pointing at the dog who give a single wag of his tail.

Alice smiled into the tea and took a sip. It tasted sweet and milky, just the way she liked it.

‘So, how did you get out here, if you don’t mind me asking?’ Kipp questioned.

‘I had to get away,’ Alice sighed, ‘my job interview went disastrously wrong. I was so upset and embarrassed, I decided to have a walk.’

‘Surely, it couldn’t have been that bad?’ Kipp asked.

Alice sipped more tea and shook her head, ‘I was so nervous that I tripped through the front door then I couldn’t remember the interviewer’s name. I got all my answers mixed up and I knocked over a glass of water and she got covered in it. When I tried to help her clean up, I hit my head on the desk and fainted.’

‘That’s not good,’ Kipp said, there was a hint of laughter in his voice.

Alice looked up, she had been staring at Duke whilst she spoke, scared of what Kipp’s reaction to her story might be. She saw though that he was trying very hard not to laugh and keep fixed a serious expression his face. He looked so cute and funny that Alice couldn’t help but giggle.

Kipp relaxed, a large grin spreading across his face, ‘I guessing you didn’t get the job then?’

‘I don’t know…she said she’s call me but I’m guessing not,’ Alice replied.

‘Well, you know what to do next time now.’

Nodding, Alice drank the tea. It was making her feel better and so was talking to Kipp. Though, she would have preferred him not to have seen her in this state. He probably has a girlfriend, she thought then scowled herself, this was not the time to be thinking of romance.

Kipp rubbed the back of his neck, cast a long look at Duke then turned to her.

‘It sure doesn’t feel like it. I’m no good at interviews, I get so nervous!’ Alice replied.

‘It’s all about practice,’ Kipp explained.

Alice finished the tea and handed back the cup, ‘thanks, I really needed that,’ she said.

Kipp took it from her with a heartbreaking smile, ‘it sure looked like you did. Happy to help.’

He fixed the cup back on the thermos and placed it in his rucksack. Swinging his bag back on, he looked around casually, giving the impression he wanted to leave. Duke on the other hand, seemed to have fallen asleep.

She knew she was clutching at anything she could just to stop Kipp leaving.

‘About five years old,’ Kipp responded with a slight shrug, ‘he’s super lazy. A trait of the breed. He’d sleep all day if you left him be.’

Alice hurried to think of another question but her mind had gone blank.

‘Anyway,’ Kipp said, pulling the straps of his bag up, ‘it was nice to meet you. Good luck with the job hunt.’

Kipp whistled then called for Duke.

The great dane raised just his head and looked grumpily over. Then slowly he got up on his long legs and ambled over.

Kipp patted Duke’s head and they turned to go.

Say something! Alice screamed at herself.

‘I should repay you,’ Alice gushed.

‘No wait,’ Alice cried, fumbling for her phone in her handbag, ‘let me give you my number and I’ll buy you dinner,’ she added without even thinking about it.

A confused expression clouded Kipp’s face, ‘no,’ he said and came back over to her.

‘I should buy you dinner,’ Kipp stated.

Alice opened her mouth then closed it. What had he just said? Words tumbled around her head, she tried to make them say something but it was too hard.

‘If you want that is,’ Kipp added, ‘I’m liking the wild forest woman look you’re rocking there.’

Alice reached up to her hair, where his finger was pointing and pulled out a piece of fern.

‘Oh…I…’ she mumbled and tossing the fern away, began tugging at her hair in search of more.

‘It sounds like you’ve had a bad day,’ Kipp went on, ‘and I wouldn’t be much of a gentleman if I didn’t try to make it better. So?’

Alice stopped panicking and dropped her hands from her hair.

Kipped held out his hand and shyly, Alice took it.

(Inspired by; https://scvincent.com/2018/05/10/thursday-photo-prompt-fallen-writephoto/ with thanks).