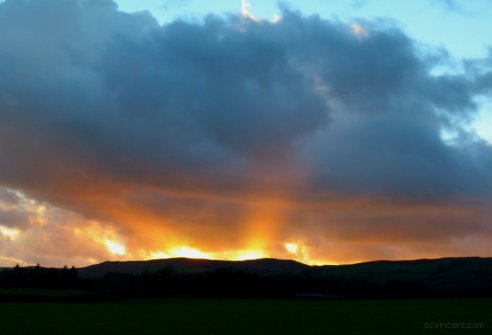 The sky was the colour of fire; red and orange flames with grey smoke which blocked out what should have been a pretty blue afternoon. Below was the dark green mix of nature that made up the countryside raising around me.

I had stopped on the little road in the seemingly middle of nowhere, at first believing the sun was setting. Then I had double checked the time and saw it was a little after four PM. The wind carried the scent of smoke to me and my brain connected the dots.

I got back in my unmarked car, knowing it was too late all ready but continuing to drive all the same. Soft classical music whispered from the radio but it did little to calm down the spikes of tension I was now feeling. I thought about trying to trick my mind into thinking it wasn’t a fire, maybe the summer sun that normally set around eight or nine had decided to have a very early night today? I couldn’t live with that denial.

The road weaved like all country tracks did, following the flow of the land like a river would do. A few miles later, I passed a sign; Lachandra Manor, private house, no entry. Tall trees blocked my view for awhile then a towering black gates with stone pillars emerged. The same sign hung below one of the pillar tops on which sat a stone lion with a single paw resting on a ball, facing it’s companion on the other pillar.

The gates were open and I drove through. Had they been open on my previous visits? I couldn’t remember expect for the first two times when they had been closed. I had had to get out of my car and open them myself. Thinking about that give me something to do as I drove along the long straight driveway.

Towering trees lined up either side of me like giant guards silently judging me. I knew that behind them were farming fields and woodland. They also blocked the view to the house but I knew it was actually the road that caused the manor to appear and disappear. The road dipped unknowingly and at first you didn’t feel it but then you saw the road rising ahead of you and you realised the slope.

My car handled it well enough and after the climb of the hill, another set of gates and the stone monster archway came into view. Behind that, the fake castle gatehouse stood looming and beyond it Lachandra Manor was heavily a blaze with fire.

A chill went up my back and there was no point in trying to focus on anything else. I carried on driving and saw the second gates where closed. I flung open my car door, yanked the hand brake on and got out. The gate wasn’t locked and I easily swung them open. The smell of smoke was thicker here and I thought I head the distant screams of sirens.

Getting back in my car, I drove through and up to the fake gatehouse. I stopped and parked a meter or so away from the looming stone archway. Opening the door this time, I could smell the smoke right under my nose and also hear distance voices and the roaring of the fire.

I hurried through the gatehouse and found chaos on the other side. A huge black horse was rearing up and a small boy on the ground was trying to control the beast by loose reins. Two teenage maids were off to the other side, standing and screaming, their clothes soot stained and faces flushed. Male servants were dashing about with water and sand buckets, shouting at each other. Thick smoke billowed all around, the sounds of crackling and snapping echoing loudly. And the heat….it was as hot as I imagined the surface of the sun to be.

I grabbed the maids, they resisted at first but when they saw who I was, they let me shove them under the gatehouse. Next, I grabbed the boy who refused to let go of the horse but his hands were sweaty, so I was able to tug the reins out easily enough and take them. I half carried the boy and led the horse to the gatehouse. Once there, the black beast shot off down the driveway and the boy give chase after it.

‘The Lady is still inside!’ one of the maids shouted and pointed upwards, behind me.

I turned and saw through one of the broken windows, a woman dressed in blue. Some of the men were trying to save her. I knew it was too late and their efforts in vein, just as it was to put out the raging fire. The woman disappeared and flames licked at the window. Wood popped and hissed, blackening under the heat and crumbling away.

‘Do something, Detective!’ the same maid cried.

But what could I do? It was all my fault anyway. I had solved the case and been on my way to arrest her for the murder of her husband and son. She would have been found guilty and hanged. Lady Ellis had known it last time we had met. She didn’t want to die like that so had chosen this instead.

I looked up at Lachandra Manor engulfed in fire and knew that nothing would be saved.

(Inspired by; https://scvincent.com/2018/05/31/thursday-photo-prompt-conflagration-writephoto with thanks).