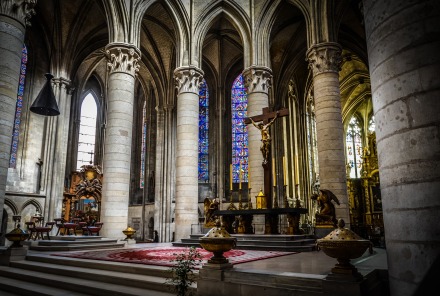 Amber light streamed down from the arched windows, splattering the altar and their upturned faces. The congregation, choir, organist and vicar all remained seated as the earthquake rocked the church.

The stone floor, walls, pillars and the stained glass in the windows shook. Candle stands toppled and the people closest reached out to grip the still burning candles. Vases of flowers tipped too and people moved out of the way. The vicar and members of the choir collected the Holy Communion things off the altar. The church bell began ringing by itself.

The choir master started up a hymn. Other voices joined in, mingling with those who were saying prayers aloud. The vicar joined in the song, his voice drowning out everyone else, until the organist began playing the hundred year old organ and those booming notes covered everything but the rumbling of the earthquake.

Dust fell from the high wooden beams and stone roof. The sound of things falling echoed then the vibrations stopped and the rumbling faded. People opened their eyes and looked around. The church was still intact, they had survived.

(Inspired from; https://mindlovemiserysmenagerie.wordpress.com/2018/09/28/first-line-friday-september-28th-2018/ with thanks).