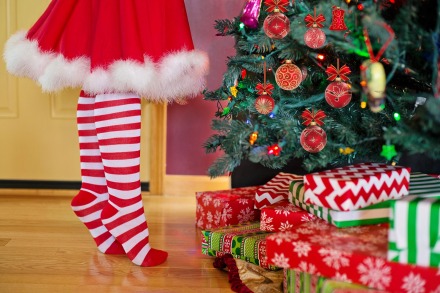 The sound of children’s voices talking woke Ellie up. She stirred, wanting to go back to sleep after staying up so late finishing off the Christmas preparations. The excitement of her children wasn’t going to allow her that lay in though.

Her bedroom door crept open, squeaking too loud to be ignored and Ellie felt her husband waking up beside her. She nudged him before flipping the duvet back and turning on the lamp. In the glow, she could see her two children standing in the doorway, red stockings clutched in their hands.

‘What is it?’ Ellie asked sleepily, even though she knew the answer thanks to their bright, smiley faces.

‘Christmas!’ they both shouted and dashed for the bed.

Ellie burst into laughter. Her husband groaned then woke up, realising what was happening as the kids began unwrapping presents.

‘Is this all from Santa?’ he asked, looking around in pretend awe.

‘Yes!’ the children answered then began babbling over what they had found in the stockings.

Ellie smiled, her whole body filled with happiness at seeing her children so joyful and this was just the start of Christmas Day, there was a lot more to come throughout the next few hours.