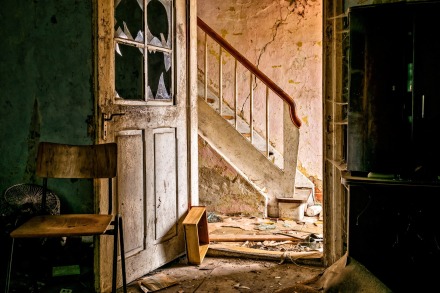 The house was ruined. Caleb stood in the doorway, his hands running over the damp and rotting wood. He tried hard to remember the home his grandpa had once lived in but he had only visited a few times as a baby and toddler. Now, the house was Caleb’s but he didn’t know what to do with it.

‘Is it bad?’ his girlfriend’s voice asked from behind him.

Beth poked her head in, her mess of red curly hair tied high in a bun tickling Caleb’s arm as she had ducked underneath him. Her nose wrinkled at the smell, she pulled a disgusted face then smoothed it out into a sad expression.

Caleb moved his arm, bring it over and down to go around her back. He curled his fingers around her side and held Beth for a few moments. He shut his eyes on the scene then felt Beth stroking his flop of black hair and trailing her fingers down to his cheek.

‘We don’t have to go in,’ Beth spoke quietly.

‘I need to. I want to see if anything is left before the builders come,’ Caleb answered, ‘better be careful where we step,’ he added.

Testing the bare floorboards, he stepped carefully inside and keeping close to the wall. He held out his hand and helped Beth across. Together they went into what had been a living room. The damage from the flood and vandals was worse then Caleb could have imagined, even though the lawyer had prepared them for it.

A dirty, water line about four foot up the wall ran around the room, marking the height of the flood. Wallpaper was peeling or had fallen off, plaster clumps lay about and in some parts the red bricks could be seen peering out of holes in the walls. The windows were boarded up, expect for one which was missing glass and allowing light into the miserable room.

Broken pieces of rotting furniture stuck up from the sinking floor like the arms of drowning men asking to be saved. Caleb and Beth’s feet knocked and tripped over wood, fabric bundles, glass and electric wires. Some parts of the floor giving a warning creak, making them change direction to avoid falling through.

‘I wish I could have done something,’ Caleb whispered.

‘There was nothing you could have done,’ Beth said.

Caleb kicked an empty drawer and spotted something underneath. It was a photograph. Badly water damaged but Caleb could see himself as a baby being held by his grandpa. With a flicker of a smile, he turned to show Beth.

‘He looks like you,’ she responded, ‘same crazy hair!’

‘Yeah’ Caleb said with a hint of laughter.

‘Maybe, there’ll be some more baby photos round?’ Beth wonder and she inspected the floor hopefully.

‘I doubt it. Mum didn’t bother taking many and none of the foster people had any contact with Grandpa. My adopted parents did but they would have sent high school photos,’ Caleb explained.

She stopped looking and wiped her dirty hands on the old pair of jeans she wore. She avoided looking at Caleb, hating to see him upset by the bad memories of his past.

‘Nothing else here,’ Caleb said.

He slipped the photo into his pocket and carried on his walk through.

In the kitchen, everything that wasn’t nailed down was gone. The three remaining cupboards were empty, doors hanging off. A dark flood line ran around the walls and the floor had been dug up, the plastic lino ripped back expose how bad the water had leaked through. The window and back door were boarded up, but someone had kicked it in.

Beth went to the door and swung it back and forth. It let out a squeal as the wooden board scrapped the floor.

‘Probably, squatters,’ Caleb spoke, ‘though why they’d want to stay here is beyond me.’

‘Better then the streets, I guess. Warmer and drier,’ Beth suggested.

Caleb went over and had a look at securing the door whilst Beth stepped into the over grown garden. It was hard to tell how big it was because of the tangle of bushes and plants. Rising above was an apple tree, budding with new leaves in the spring sunshine.

‘This could be nice….Needs a lot of work…’ Beth trailed.

‘Leave it. The builders will sort it tomorrow.’

Taking a deep breath, Caleb abandoned the door and walked through an open archway into the dinning room which then led into a second living room. All the wall paper had been torn off and someone had been knocking into the walls. Caleb looked at the exposed pipes as he walked over plaster and window glass.

In the second living room, Caleb went over to a bookcase in the corner. The shelves had been taken out and most of the books because someone had used them to start a small fire with in the middle of the room. There were three books left on the bookcase; Medieval History Uncovered, Knights Of The Middle-Ages and Myths and Legends of Britain. Caleb picked them up and saw they still looked readable, despite a covering of dust.

‘But you said you didn’t know him,’ Beth said from the connecting archway.

She walked though and joined him, edging around the remains of the black ash from the fire.

Caleb showed her the books, ‘Look okay to keep,’ he added.

‘I don’t mind. It’s good to save books,’ Beth said and she took them from him.

‘They could have burnt the whole place down,’ Caleb pointed out as he moved to inspect the damage in the centre of the room.

He toed a half burnt book and the pages crumpled.

‘This house has survived so much; water and fire, the elements, people,’ Beth voiced, ‘and now you want to save it instead of knocking it down.’

‘The money is there to save it,’ Caleb reminded her, ‘and once it’s done we can live here. Our five years of trying to save for, find and buy a house is over.’

‘And your past?’ Beth asked timidly, looking down at the books.

‘I’ll deal with it,’ Caleb replied.

He moved over and hugged her, resting his chin on top of her head. He could feel Beth shaking slightly and worried she was going to cry, he tightened the hug and kissed her forehead.

‘Don’t worry about me. Think about what you can do with the house.’

Beth nodded, sniffing a little and crushing the books to her breasts.

‘Let’s go upstairs. The flood didn’t get up there, so maybe some stuffed survived.’