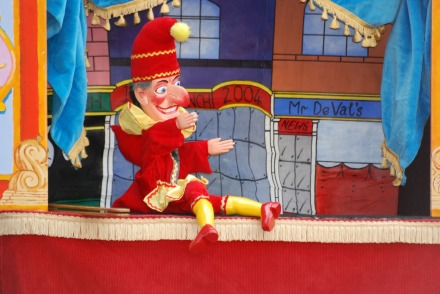 It was Chester’s last fete. No one was interested in Punch and Judy shows anymore. They had grown scary and not politically correct. Soon, he imagined, that everything would be offensive and no one would be able to speak for fear of saying the wrong thing and being put in jail.

Packing the puppets away, Chester knew he would keep them all. He would sell everything else- the red tent, the Italian style back drops and the small van he transported around in. He was in constant need of money and the puppets would have sold for a fair bit but he couldn’t part with them.

He put the doctor, clown and constable in one case. In the second went the crocodile, the dog with his string of sausages and the skeleton. The third was for the baby, Judy and Punch and his whacking stick. The four case, bigger then the others, which he hadn’t opened for this show contained the lesser used puppets of; the hangman, the devil, the ghost, the lawyer and the beadle.

Chester placed Judy then the baby inside. Finally, he picked up Punch. Feeling the weigh in his hands and studying the puppet, Chester felt the deep connection he had always had to this character.

Punch was wooden like the rest of the puppets and dressed traditional in a jester suit of red and yellow trimmed with a matching cone hat complete with pompom at the end. He had yellow painted stockings, red and shoes. His face was hand painted with a long hooked nose which was bright red end, wide teeth flashing grin, red lipstick lips, red circle cheeks, staring blue eyes and just the hint of flock grey hair coming out from under the hat.

Chester slide his hand inside the puppet and brought him to life with simple movements. Whispering words in Punch’s squeaky, high pitched voice, Chester felt like he was saying a final farewell to what had been his life since he could first remember.

The shows had been his grandfather then his father’s trade and naturally Chester had followed them. The puppets, who had been repaired and repainted over the years had belong to his grandfather. It was hard to get good looking traditional puppets like this now, collectors went crazy over them.

Sliding Punch off his hand, Chester placed the puppet in the case. He closed the lid and wondered if he would ever get the puppets out to perform again.

He took the cases to his grey van then drove back to pack up the rest of his show. As he did so, he noticed some of other stalls packing away too. It had been a good crowed for the autumn harvest festival in this farmer’s field and the weather had held too.

The smell of pies, cakes, cheeses and burgers had filled the air all afternoon. Children had ran about laughing, holding balloons, candy floss and over sized stuffed toys won from the game stands. The music and noises of the fairground rides in the field next door had become background to everything else.

Chester drove his van back to the car park, made sure it was locked tight and walked back to the field. He brought a few last minute things – a pie, some cheese and a fancy bottle of fruity wine. He walked passed the craft and snack stalls into the tea tent.

They were still just about serving. He got a cup of tea and a slice of lemon cake. Sitting at one of the empty tables – of which there were many- he people watched and listened to the chatting.

The creeping feeling of being alone came across him. He was an old man now in his mid-sixties. His wife was dead, his only son moved to Sweden for work then stayed due to marriage and two children. Chester had meet his grandchildren once or twice. He didn’t have a good relationship with son or his wife, there was too much bitterness there. Nor was Chester a fan of being called ‘farfar’ the Swedish for grandpa.

He kept his distance, just like he had done with other family members. They had frowned at his career choices, said he was too close to his puppets, thought he was odd and the black sheep of the family. He was best written out and forgotten about.

Chester sighed and finished eating and drinking. He sat until the tea tent closed and an old woman shooed him out.

The fete was slowly closing but Chester walked through the prize flowers, veg and fruit and autumn themed displays as they were packed away. It was always nice to look at the hard work of other people and celebrate their achievements which were so unlike his own.

After, he crossed fields and wandered around the fairground. There were many rides all being lit up as the evening darkness arrived showing that though the fete might have ended the night was still young here.

The air smelt of greasy burgers, hot dogs, chips, melted cheese and burning donuts. There was also a smokiness from all the grills and the sweet smell of sugary treats.

Adults, teenagers and children crowded the muddy pathways. Their voices raised above the booming music to point out a ride they wanted to go on or a food stall they wanted to visit. Ticket booths had queues outside and there was an atmosphere of a party.

He looked at the game stalls. Grab a duck win a goldfish! Throw three darts pop a balloon for a prize. How many hoops can you score? Tin can alley knock down them all. Ladder climb, ring the bell at the top to win! Bingo. Horse Derby Racing. Whac-A-Mole and finally, the one he wanted; Shoot ‘Em Out.

He paid for three rounds, heaved the air rifle to his shoulder and aimed at as many targets he could. The rife give a kick back he recalled from the real thing. In a flash, Chester saw himself in the woods with his grandfather and father shooting deer, rabbits and pheasants.

Chester focused on the moving targets like they were real animals. His score came close the first tine. The second and third rounds, he shot down enough to win two medium or a large prize.

‘What do you want?’ the grumpy looking vendor man asked Chester and began pointing out the stuffed toys as he named them, ‘a tiger, a unicorn, a panda, a dog or one of these kids movie characters?’

Chester looked across to the other prizes and the vendor continued, ‘the medium ones are a fish, a turtle, a teddy bear, a rabbit….whatever.’

The vendor shrugged his shoulders then crossed his arms over his stained waist coat.

Begrudgingly the the game’s owner handed them over. Chester thanked him and walked away. He would keep the teddies to send to the grandchildren for Christmas. He started to head back to his van but his stomach growled at the scent of food.

He brought a burger then some chips which tasted much better. For the trip home, he got some bottled water, sweet rock pieces, sticky toffee and hard humbugs.

Back in his van, he sucked on a black and white, minty humbug and tried not to feel tried. Starting the engine, Chester looked in the rear view mirror into the back of the open van.

‘Right, Punch,’ Chester spoke, ‘I hope you’ve had a good last show because it’s time to go home for the last time now.’