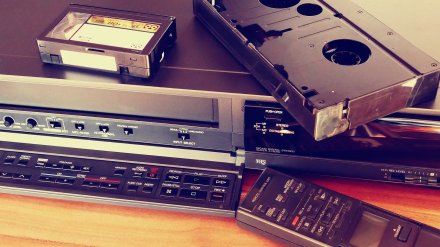 Vidiot – an habitual watcher of TV or videotapes

He wouldn’t get with the times. He wouldn’t change. He carried on as he always had done. Outside, he went with his heavy bag, he found places to set up his camera and he recorded what he found. he changed the batteries and tapes as needed.

He watched people going by, listened to their conversations, he filmed animals, houses, trees, trains, planes whatever he fancied that day. He kept history in the making and felt pleased to do so. He recorded newspapers and magazines, TV and movies.

In the winter or when the other was bad, he stayed at home and clipped together his own ‘movies’. It was easy he found to mix up his video recordings with other things and he enjoyed doing something more creative.

Video though was old tech. Digital had moved in and come to stay. He refused to convert, to be moved by this new mystery. No, the old ways were the best. Old things lasted longer and they always became in fashion again. He just had to wait.

He carried on recording, getting in trouble with people and police. Teenagers spit at him, woman slapped him and children ran into him. The old people who had grown up with him and whom he now was one of, said he was harmless. He had always been there with his camera and stuff, filming to preserve history.

Once people had enjoyed being recorded and had come to him to ask him to film them. It had been like a novelty, a bit of fun but now there were places were he dare not go.

Schools were on his black list as well as through windows and direct shots at people. Playgrounds were no go and he could only film in parks if he was far away from people and focused on animals. He thought it was shame to be missing bits of the world but what could he do?

He was tried of angry people and of being told off. He just wanted to be left alone to do his job in peace. His only escape was inside his house, behind curtain windows and locked doors. There he could create a world he wanted and watch over what he had recorded.

He found a truth in the flickering imagines on the TV. Friends in his stacks of videos. Comfort in the normal sounds of the world and knowledge he was doing a good job.

This was his museum, his art left to the world.