Raking leaves should have been my son’s job, just as it was mine as a kid. However, my son is gone and has been for twenty-three years. He had been ten years old, a boy full of life which had been cut short.

I pause in my raking, leaning on the smooth wooden pole as I get my breath back. Looking up at the left front window of my house, I see my wife standing there. She is stroking her short white hair, her mouth moving as she speaks but her eyes are not watching me, they are staring into the distance.

The dementia has her mind in a tight grip of late and some days she doesn’t know who she is. In my heart I know she doesn’t have much longer to live but I can’t let her go. I wave at her and get no response back. She carries on playing with her hair and speaking either to herself or to someone she thinks is there but has long since passed away.

Getting back to work, I pull the dry leaves together into a pile, freeing the grass from the quilt blanket the leaves create. I wouldn’t burn them but put them on the composed heap to be used in planting my show flowers in the spring. Garden is the only thing I have left to enjoy now.

The front door opens and I hear my wife shouting. Her words are garble and it’s hard to pick out what she’s trying to say. She pulls at her hair and dress as she comes down the path.

She ignores me, trapped in a world of her own.

I go over and leaving the rake against the side of the house. She’s clearly in distress but there is no way she can tell me what’s wrong. It could be she believes she is in a different time and some moment there has triggered the upset.

I talk to her softly, calming her though she seems unaware of me, ‘it’s fine, whatever it is. I can help. You are okay. I’m here.’

I reach for her but she waves my hands away and carries on shouting out what seems to be just random words, ‘not here! Gone! Come back! Where is he? Don’t know what to do! Alex! Alex! Frog in the hallway. Frog, frog, frog! Gone! Gone!’

It’s hard when she gets like this. I want to get her back inside and sat down but she would fight me all the way and last time she pushed me down and I almost broke my arm. I know I’m too old to deal with her now and leaving her care to a specialist would be best. I can’t though. I can’t let her go….

I pick up a stray leaf and press it into her hands.

‘Look Olive, isn’t it pretty? Listen to the sound it makes,’ I say.

She crunches the leaf, tears it up and lets the bits fall from her hand. She stares in fascination.

I give her another and another. She crunches them in her fist and tosses the leaf pieces to the wind. They blow around in the breeze and she watches them go.

I take her hand and led her to the pile of raked up leaves.

I can’t explain that he’s been dead for years because she won’t understand and though it hurts, it’s easier to lie.

‘School?’ she repeats as she picks up leaves and plays with them, ‘he never comes home. Never. I miss him….When will he come? When, when?’ she cries with desperation.

‘Soon, dear, soon,’ I reply gently, ‘come back inside now. It’s cold out here and you are not wearing a coat.’

I take her arm and guide her away. She starts muttering to herself again, words I can’t catch or understand.

Once inside, I get her in front of the TV, feet up and wrapped in a blanket. Her eyes are distant. She isn’t here, she’s off in the past, some place I might not remember or don’t want to recall.

I stay with her until she is settled enough to be left again. The news is on the TV but she’s not watching it but the sounds of the voices help her to feel not alone.

‘I’m going out again but I’ll be there if you need me. It’s getting dark and I want to finish,’ I say.

She says something which is lost on me.

I get up, go to the front door and on the mat is a crumbled brown leaf. I pick it up and take it outside, feeling a pain my heart that never goes.

Mulch, the autumn fairy, stirred up the fallen leaves with his wings and laughed as he become wrapped in a snow globe like effect. He dropped in a heap against a tangle of tree roots. His mole skin tunic, leggings and mouse skull hat were splattered with dirt but he didn’t care.

A chilly wind shook more leaves down and Mulch dated upwards and danced with them as they fell.

This was his favourite time of year. The woods rang loud with Mulch’s laughter but to human ears it sounded like the babbling of the brook. 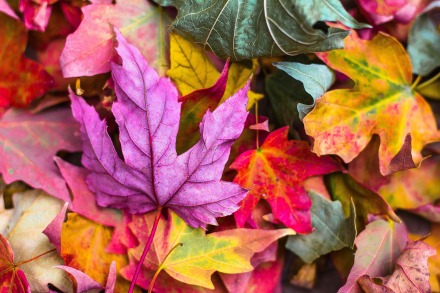 Strong winds blew summer away, everything became colder and darker but colour bloomed in the changing leaves which danced to the ground.

There was a carpet of autumn leaves on the floor of the woods and Jess was loving hiding in them. This was her second autumn and she was fascinated by chasing anything that moved.

I laughed as she raced squirrels to trees and barked at flying birds. I went horse yelling her name repeatedly and she would come bouncing back, splattered with mud.

Jess was having a great time, it seemed a shame to end it. I would have to put her lead on and drag her home, but I didn’t feel like I could when she was so happy.

When autumn comes it’s time to turn over a new leaf, to began a new as the trees turn colour.

I surrendered to the wind and give up trying to sweep the leaves out of my house. 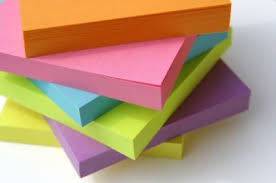 The leaves were still falling and it was colder outside. Moulding pumpkins sat outside houses and I wondered why. 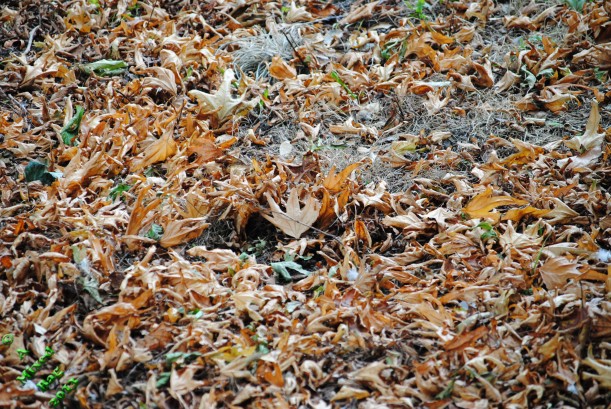 The trees have already begun to change but it feels too warm for autumn. I walk in the park, kicking up some of the orange and brown leaves whilst in the background children play happily and dogs bark. I’ve always liked this season best, plus, Halloween is right there and I just love that!

In spring, summer and winter, people stand and stare at the girl all dressed in black, looking like she just got off the set of a horror film. It gets worse though when some realise the job I’ve come to do. No one really likes the touch of my hands, but they all have to face it some day.

In autumn, I can be myself and no one notices. I’m just accepted. Not that I’ve ever cared about that, I’m just me and I always will be, no matter how people see me. It’s just nice not to be stared at or to have whispers trailing you. I can fully embrace autumn which is something I can’t do with anything else.

What I want is simple enough, I wrote in my journal,  I want to feel the fall leaves brushing past me and winter’s icy breath on my skin. I want to watch the early nights come then curl up before a fire with a hot chocolate. What I want is to walk during the dry days and sat reading on the rainy ones all though this season and the next.

I paused, tapping the top of the pen against my lips. Thinking, I then added; If only I could do that! If people could be like the animals that hibernated then winter would be more joyful. I could just do what I want; the above. But life doesn’t work that way and the rain and snow don’t stop peoples’ plans.

Still though, to be a squirrel running around and collecting food, scampering through the leaves and curling in a little hidey-hole to sleep. That life seems simple and easy. But then I wouldn’t be able to read or sleep by a fire! And what if the other squirrels were mean to me?

No, I guess being me is easier for the moment, even if that’s not what I truly want. 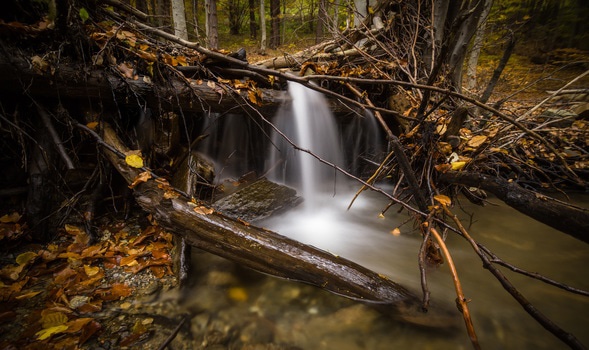 Today, I found the most wonderful, magic place in the whole of this forest. It made me feel better about not getting any bear photos! I think I’m going to give up there and just carry on taking whatever else I find. I know what my editor really wants, but who actually wants to see someone getting mauled by a bear?

This place is just, wow. The river has been drawing me for ages now and today I followed it and found some awesome waterfalls and large pools. The fall is just making it feel more magical. The colorful leaves that everywhere just add this brightness and like clothes to the forest. That sounds kinda silly, but you get it right?

I wish you could be here with me. You’d love seeing all the little critters getting ready to sleep and having birds wake you every morning. I know the nights seem scary, but they’re not really. Once, I shut the door of the cabin, I sit by the window and just look outside for ages. Last night, it felt like I was the only man left on earth and I so wanted you there so we could experience that together.

I’ve only a week left now. And yeah I know my editor’s not going to get his photos, but he’s going to get something at lest! And we’ll be back together and I can tell you more about my adventures.