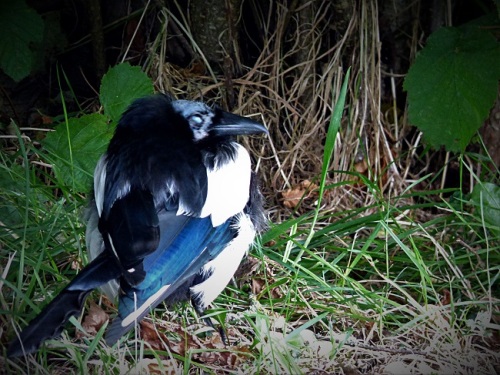 It was the last day of September and a Monday which meant that Sadie had been super hectic at work. Finally, she was free to go home and though she was tried, she had a busy evening ahead.

As the bus engine vibrated underneath her, Sadie listed off her plans; home to eat and shower, then off to the coven meeting. There the practising witches would welcoming the coming of October at midnight. Afterwards she could go home to sleep.

Getting off the bus, she hurried down the road to her small house. The sky above was almost dark and Sadie hoped it wouldn’t rain. She opened the gate to her house and went up the path. On either side, Sadie’s front garden grew wild with a mix of things she used in cooking and magic.

Something rustled close by the front door. Sadie paused and looked down. There was something black and white sticking out of a clump of rosemary. Sadie peered further and saw a magpie trying to hide.

‘What are you doing down there?’ Sadie asked.

The magpie let out a soft, distressed cry. One of his wings was sticking out strangely and there was dried blood.

She dug out her keys, let herself in and rushed into the kitchen. Getting a clean towel, Sadie went outside again and scooped up the magpie.

The weak bird allowed himself to be wrapped up and taken in without a fight.

Sadie placed him inside an old wicker basket then wondered what to do.

‘I’ll take you to the coven,’ she said aloud, ‘someone there will know what to do with you. A few of the witches have bird familiars.’

Sadie kept the magpie warm, give him little bit of cooked chicken and some water. When he seemed settled, Sadie got something to eat herself. After, she showered and changed in her black dress and purple hooded cloak.

Tucking the magpie carefully into the basket, she carried him to the basement of the abandoned factory where the coven meet.

Candles light all the walls and corners of the room. Chairs and tables were dotted around, some with witches sitting on them. Other figures moved across the centre, making markings on the floor.

Sadie found a male witch, Alex, who had a raven familiar, to help the magpie.

‘Looks like he’s been hit by a car,’ Alex told her, ‘this wing is broken and he’s in shock. You did the right thing. I’ll look after him.’

‘Thank you,’ Sadie replied, ‘I knew I couldn’t leave him to die.’

The welcoming of October began and they joined the others in the nighttime celebrations.

Hours later, the witches closed things and said their farewells. Sadie was too tried to give the magpie anymore thought and went home to bed.

Days later, there was a knock at Sadie’s door. She opened it, thinking it was the postman or a neighbour but it was Alex.

Alex smiled and added, ‘and your new familiar too!’

Said looked into the basket and saw the magpie. He was looking healthy, his broken wing fixed and he had been well fed.

‘Yes,’ Alex replied, ‘I asked him if he wanted to be released or stay with you. He decided to thank you for saving his life by becoming your familiar. His name is Harbinger.’

Puzzlement crossed Sadie’s face and she looked from the magpie to Alex, ‘I don’t know anything about birds or having a familiar…’

Alex laughed and replied, ‘Harbinger and I will teach you all you need to know.’

(Inspired by; https://scvincent.com/2019/09/26/thursday-photo-prompt-harbinger-writephoto/ with thanks).