The mists were down heavy, covering everything with a white cloud blanket that wasn’t as pretty as snow’s. It was too dangers to go jogging, though I had attempted it but after being almost hit by a car, I had retreated home.

Running on my treadmill inside my attic instead, I saw something merge from the mist; the ghostly outline of a manor house on the hill. I stopped and stared, knowing full well there was nothing there.

It was just my eyes and brain playing tricks on me, or was it?

(Inspired by; https://flashfictionforaspiringwriters.wordpress.com/2018/09/03/fffaw-challenge-181st/ with thanks).

He watched the mists rolling across the field and patchy woodland from his bedroom window. He was still in his pajamas, the blue and white stripped ones that his wife had brought him last Christmas. His lower back ached and so did his upper legs, as if he been sleeping on a pebble beach instead of the well worn soft bed.

He did the morning exercises like his doctor had told him too. The bending and stretching helped a little but he’d still need some pain killers to get through the day. Perhaps, he’d take a bath later, if he remembered though he already knew it was going to be another day inside; watching TV, reading, napping, cooking then falling asleep on the sofa.

Watching the mists would entertain him for awhile and if it cleared up maybe he’d go for a walk. It didn’t though. Just like the snow and ice the other day, the mists hung around as if they were happy to be there. He didn’t really mind, it was interesting to see how the mists give everything an out of focus look.

In the evening, it was nice to see that the mists even softened the too harsh Christmas lights coming from other peoples’ houses. He looked at the small tree his daughters and grandchild had set up for him before the front window. The lights were on a timer so he didn’t have to do anything. He and his wife normally put the tree up and placed the children’s presents under for them to open on Christmas day…

This year, he’d be going to stay at his eldest daughter’s for a few days. Then his youngest daughter was bringing her family for New Year’s week. He was looking forward to seeing everyone and having the company. It was going to be just what he needed to being some brightness and colour back into his life again.

(Inspired by; https://scvincent.com/2017/12/14/thursday-photo-prompt-mists-writephoto with thanks).

Mist danced in the rising sun which fell in-between the tall trees. The land was quiet, expect for the low movements of cattle and horses. The cowboys tried after their drunken late night and rough sleep, dozed on and off, missing the glory that was around them.

She preferred hiking in the autumn because there where less people around. The empty single road disappeared into the mists ahead whilst the hills and peaks rose on either side. She breathed the damp, earthy air deeply, thinking that there was nothing else like this. Looking into the mists, she wondered what was on the other side. The excitement at being lost filled her and she just had to know. Picking up pace, she smiled and turned the corner. Nothing but the greens and greys of the middle of nowhere stretched before her but that was just how she liked it.

(Inspired from; https://allaboutwritingandmore.wordpress.com/2017/09/13/daily-picture-prompt-256 with thanks). 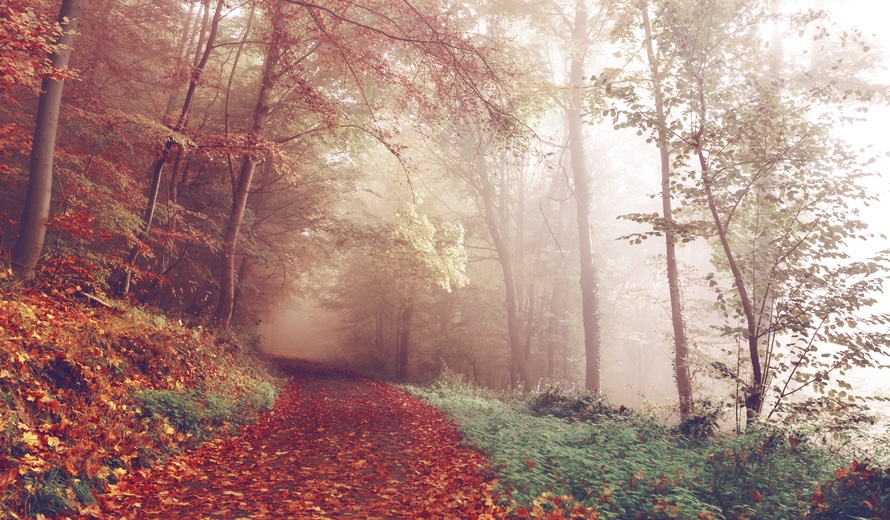 The colorful leaves fall from the trees, dancing to the ground.

I walk through them, admiring the feel of the misty morning on my skin.

Though, it’s just a vision of what once was long ago before the finally war.