Away, away, away we go. High above the land and into the world of the birds. Clouds like candyfloss, like soft pillows we rise through to the dawn light sky. There is the sun, Ra shinning his mightiest and touching the mountain tops.

The morning wind in our faces so fresh and clean! Far below the sea laps and reflects us. We gaze in wonder like the first people, nature spread before out feet, a bounty to delight us.

Roy walked the corridors of the asylum which had been his home since his twelfth birthday. He had faint memories of another home with father and mother but doctors, nurses and other patients had replaced them.

Sometimes, he heard the other patients in the distance as they screamed and shouted. In one room the cry for a nurse often echoed. Running footsteps of the staff would send Roy in the opposite direction and sometimes he would see the white tails of a doctor’s jacket as they rushed by.

Roy wondered in and out rooms. Sometimes, he found someone to talk to but most of the time that other person was trapped in crying or beating the walls. Two people he could talk to were Hattie and Alice, they were nice old ladies. He could also play with the children, even though they teased him about his height. ‘Giant,’ they called him even though he told them his name was Roy.

Sometimes strangers would come and they would bring new medical equipment with them. Roy didn’t mind them as long as they were quiet and didn’t insult the more angry patients who then went on a rampage. He would watch shyly from around corners and when he felt brave, try to talk to them but the strangers didn’t seem to hear him.

Though sometimes they would look at their cameras and get excited over shadow shapes or they would play back his voice on their recorders and act like that was the first time they had heard him.

What he didn’t like were those strangers that came to vandal the asylum. Roy would make a lot of noise, show his massive form and scare them away. He didn’t understand why those people were allowed here, they weren’t new inmates because they seemed able to leave. Perhaps, they enjoyed mocking and upsetting the patients and that’s why they came?

Roy had long taken it upon himself to defend his home and those with in it. There were people with physical and/or mental problems, children, elders who couldn’t look after themselves. The angry patients helped too and Roy didn’t get in their way when they decided to start howling and throwing things about.

It wasn’t in his nature to be like that and beside from the one embarrassing deformity which was his towering height, Roy was a normal, quiet man who enjoyed walking the corridors of the asylum and keeping an eye on things. 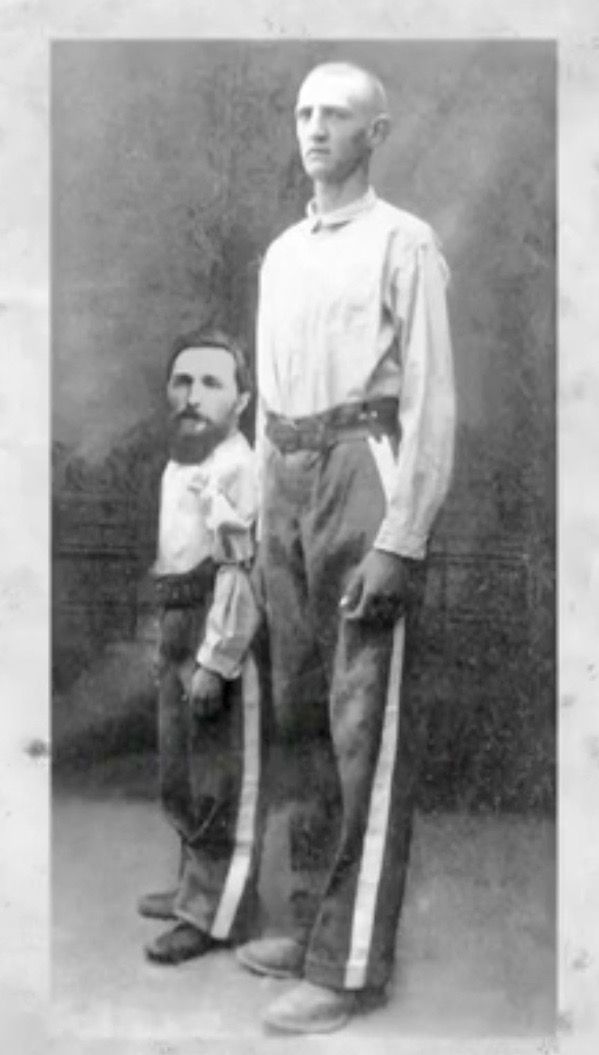 (Photo of Roy the giant from a google search)

Partly based on a real story and inspired by Ghost Adventures season 4, episode 2,  Rolling Hills Sanitarium.

The windows were crazed by icy lines as if a spider had gone hyperactive and spun it’s web madly. Frost lay inside the house as well as out, showing that this place had long been abandoned to nature.

My breath fogged before my face and I had cover my mouth and nose with my scarf. Dust lay thick and a crumbled calendar on the wall was dated ten years ago.

I didn’t fear the homeless, drug users or anyone else who might be here because the house wasn’t suitable. It was colder then outside and the water was frozen in the pipes. Plus, this house was far from anywhere else. My guess was it could have been the game keeper’s home from what had once been a big estate before the land had been sold off for the building of new houses.

I photographed what interested me, taking my time and enjoying this experience of untouched urban exploring.

A lone mug stood on the windowsill as if someone had been drinking tea whilst looking out at the winter snowstorm. I captured that moment feeling like it summed up the atmosphere in the house.

(Inspired by; https://writersuniteweb.wordpress.com/2020/01/06/enzo-stephens-just-stay-home/ with thanks).

Winter was my favourite season. There was something so satisfying about crunching over snow and leaving footprints behind. I spent as much time outside as possible, I loved visiting woods and the countryside. I liked to photograph the snow draped scenery and the cobweb lines of frost on rocks.

Photos have always drawn me in. I’m no good at taking them and I’m not interested in photography. I like to think about why someone took a photo, the landscape and people in them. The capturing of the moment, the memory.

There are some that believe photos capture the soul. I’ve not come across anything like that, just a lot of nameless faces and changed places.

What I believe is that each photo holds a story within. It’s my destiny to uncover these stories, no matter what they might be.

Relics of the past reminded me that no one had lived in this house for sixty-odd years. It was like a time capsule, frozen forever in a single moment.

I would have liked to have know what had happened here. Why had everything been left behind? Where were the owners? But those answers were long gone.

I took photos, documenting everything because despite this museum likeness, I knew it wouldn’t last. Vandals, burglars and homeless people would eventually find the house then the silence would be broken.

All would be lost to time as it should be.

Avril found the carrier bag of photo negatives in the attic and decided to get them developed. When the photos came back, she saw the faces of relatives and their friends. All those people were gone now, yet here they were now before her, captured forever in print.

Veld; a grassland of southern Africa.

It stretched far and wide, a seemingly empty grassland but I knew that wasn’t true. Out here there were herds of wild animals and my camera finger was just itching to take their photos. The life of a photographer might not be easy but it give me the chance to experience places like this.

The overnight frost had caused the snow to freeze. It crunched under my boots like loose stones. I had been trying hard not to make noise; an impossibility!

The vixen’s call for cubs to come home made my heart sank. I had split-second caught red flashes of foxes across the river half an hour ago and had followed a trail since. Now it seemed I had missed my chance to photograph the cubs playing in the snow.

I sighed and took a few photos of the scenery. Not what I wanted but there was no reason to waste the opportunity.

He liked how the light and shadows mingled together, he took a photo of the hallway. He wasn’t scared to be alone in the abandoned house, it interested him and he found a strange peace a way from the world. Still, he got a feeling that something wasn’t right…