The phone rang. April opened her eyes and rolled over in bed, ‘not today please,’ she muttered. Tugging a pillow over her head, she settled back down.

There was a knocking at the front door. April moaned, ‘not now,’ and turned over.

Something was tugging at the duvet, then there was a weight on her legs. April, disgruntled and looking dishevelled, peered to see what it was.

‘Hello, cat,’ she said and scooped the tabby up.

Snuggling her pet, April went back to sleep again, lulled by the cat’s purring.

A tapping on a window downstairs came next. April shifted around and decided the warm, heaviness of her bedding wasn’t worth the effort to move. Ignoring the sound, she drifted off again.

Another ring of the phone. The shrill tone echoing through the quiet house like a warning alarm. April unwrapped the cat from around her head and pulled down the duvet.

‘Go away!’ she shouted at the phone. She picked it up and slammed it back down.

April lay back and looked at the ceiling. Her cat crawled on to her chest and curled up there.

‘Today is a myself day and I don’t want to talk to anyone,’ April spoke.

Sundays was made for spending in bed undisturbed watching classic TV shows, reading huge books and relaxing away.

Lavender ran fingers over the purple flowers she was named after. A heavy scent clouded the air, she breathed in deeply, felt relaxed but also a bit head-achy which due to being in this field. Too much of a good thing! Getting a lavender sprig she took it home.

George didn’t know why it had taken him this long to find what he was looking for. He guessed it was because he had been looking too hard and thus not noticed it before. Sitting down on the bench he looked passed the two beech trees that created a nice frame and watched the sun began to set.

Everything felt so peaceful in this lonely corner of the park. The birds were singing evening song at their loudest and best, the hum of people and cars was hardly a distant sound and George felt the happiest he had done in months.

He took a few deep breaths, relaxed and saw the blue sky and white clouds being washed by colours of pink, yellow, orange and a dash of purple. George couldn’t remember the last time he had seen the sunset but that and everything else seemed not to matter right now. He was in this moment and that was all that was important.

The old peoples’ home where he lived was far from his mind and so was the bed he had just spend weeks being ill in. All the smells he had grown to know were go and replaced with fresh air, the blooming of flowers, cut grass and earth.

He knew if he just shut his eyes, he could pretend to be young again; a boy out playing after school, a teenager enjoying a break from exams, a young man wooing a lady with a evening stroll. It was all there in his head, that past life of his, that seemed so far away and almost like it belonged to someone else.

George didn’t shut his eyes though, he kept them fixed to the sky, wanting no other thoughts or feelings right now expect for peace. He had been in pain – emotionally and physically – for so long and he just wanted to be free of all that. He needed to move on now and live the final chapter of his life.

The warmth that had been surrounding him dipped away, leaving George feeling cooler. Above the sun was fast setting, the colours becoming darker and the sky turning grey. The tree tops turned black and a near by lamp flickered on.

It was time to go back, even though he didn’t feel like it. If he could stay, he’d sat through watching the night but he was too old now to cope with the creeping chill of the air. The idea of a hot cup of tea and a cosy bed was calling to his achy body.

Unsteadily, George got up and walked slowly away, leaving the sunset behind him.

(Inspired by; https://scvincent.com/2018/06/14/thursday-photo-prompt-beginnings-writephoto/ with thanks).

This Sunday, I just want to lay in bed with you and spend the whole day snuggling.

She tossed her head back, basking in the early evening sunlight. Dangling her bare feet over the edge of the jetty, her soles just skimmed the calm lake’s surface.

This is the life, she thought.

Shutting her eyes, she let the warmth drift across her face. She heard little waves lapping against the shore, the jetty and the small boat that was moored behind her. Birds were singing their late evening song and the wind was sometimes shifting the late summer trees.

There were no people or cars or another distractions, it was just her and the lake.

In the woods you can just be yourself. You don’t have to answer to anyone. The trees and animals accept you for being you. Peace will come upon you in the woods as you shut your eyes and take deep breaths. The river plays a soft song for you, helping to relax your body. The breeze moves the trees carefully, carring the scent of flowers and grass to you on warm carcasses. The birds chime happily in the trees, even though they don’t play for you, they can’t resist an early evening at the height of summer. And you can let go of everything that has been holding you back. Release the stress and worries into nature. Now breath. 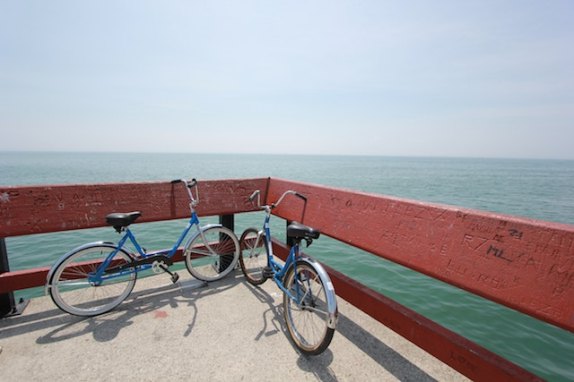 The world looks different from the seat of a bicycle. Everything seems far more relaxed and there’s no hurrying if you don’t want to.  Things just drift by, blending into color and you wonder why you never noticed the small things before.

Petrichor; the pleasant smell of the earth after rain.

Everything smells better after it’s rained. There’s a cleanness in air which my ma said was God washing and cleansing everyone. I use to believe that without a doubt. Now though, I’m not sure. There’s so much I believed in as a child which has faded now I’m adult.

It’s strange how different things are after the rain. You notice the pools and reflections of things more. The sounds of splashing wheels and feet. The dripping of drops off things. I randomly remember a boy once telling me that the rain was actually a leak from Heaven’s showers.

I wondered for ages how that was possible and pictured angels having showers all together. Or God having a bath and all the water overflowing. Maybe that was the real reason behind a flood?

When you’re a child it’s easier to believe in these things. As an adult you are more logic and less imaginative. You know how rain is made and why it falls. The novelty of it has worn off too, like snow. I use to love snow! Now, it’s just a pain.

Even though, I know the truth behind things now, it doesn’t take the pleasure away from them. During the rainfall and afterwards, I open my window to let all the smells and sounds in. I sit on the ledge and take deep breaths till I feel calmer. I try to think of nothing at all, but sometimes like today, my mind wonders.

I look up at the sky, where the dark clouds roam and a few rain drops still linger. Are God and the angels up there right now having a bath and cleansing the poor below?

It was her favourite thing to do after work. She would sit back, put the headphones over her ears and find some music to suit her mood. Sometimes it would take a few tries, but then she would hit a smooth song that would be sweet to her ears.

She would relax and let the sounds carry her far away. She’d leave everything behind; her troubles, her thoughts, her dreams, her body. She would drift on a cloud of notes, high above everything, where nothing could touch her.

And there she would find it; nirvana.