Schools closed due to snow. No one to look after kids, taken day off, gone park to build snowmen. Loves. 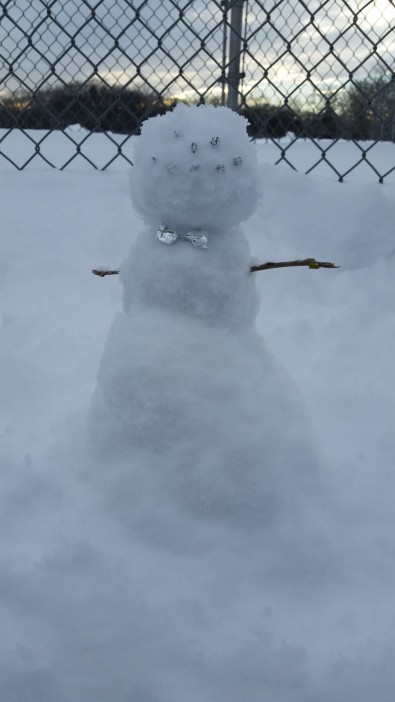 When you are a child snow is magical and fun. As a adult, snow loses that and becomes inconvenience. The simple tasks became almost trial like with everyone battling to win. These thoughts came to me as I watched from my living room window. The snowflakes was coming down heavily once again and laying a top of the inches deep snow that had already fallen.

I heard my boyfriend coming downstairs and I walked out into the hallway to meet him.

‘Let’s go build a snowman in the garden,’ I said.

He stared blankly at me. His mind processing what I’d just said and checking it was correct.

I started grabbing my coat and boots.

I shrugged, ‘I just fancy it. Remember when you were a kid and it snowed? It was a thing you always did alongside snowball fights and sledging.’

‘Sure,’ he said, though his voice was still uncertain.

We dressed and headed outside. The snow fell and melted on us. I felt an icy breeze on my face. Leaving deep footprints, we circled the garden and began building a large ball of snow.

Slowly, that magic of childhood came back to me. 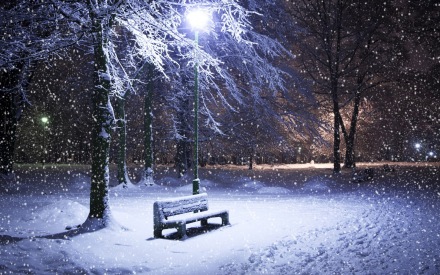 It was the first snowfall of the year. Luke pressed his nose against the condensated window and which a flurry of flakes. Across the road, he could see the park and the shadows of trees. Tomorrow, he thought, I’ll go out and build a snowman.

Bundling himself in his duvet, he huddled in the window box and looked up at the cloudy dark sky. The snow was falling faster and thicker now, silently hitting the window. He thought about making a wish then reminded that was for shooting stars. What did it matter though? A snowflake was just as magical as a star.

I wish my parents would return, he wished.

Opening his eyes again, he continued to watch the snow falling.

There was frost on the carpet as Darcy pushed the front door fully open. She paused on the step, arms weighted down with bags and her ears stinging with coldness. Frowning, she cast her eyes to the staircase where the small trail ended. She stepped inside, put down the bags and closed the door quietly.

Taking off her long coat and knitted hat, she shook out her curly brown hair. Hanging her things up and taking off her boots, she heard soft laughter. Deciding to leave the bags in the hallway, even though she knew it to be a risk, she walked towards the living room. The cold and wetness of the hall rug sink into her thick socked feet and she scrunched up her toes.

Sticking her head around the door, she saw her mother asleep on the plush armchair. The TV was on, though the sound was turned down and Darcy was able to make out the program to be a church carols one. Turning away, she followed the wet patches down to the kitchen. The door was ajar, like the front one had been and gently, Darcy eased it open.

The scene before her was one that would stay with her for years to come. Her four children were gathered around the fridge-freezer, the oldest one, Riley, balanced on a chair and the youngest, Tess, sat on the floor, whilst the other two, twins, Alex and Andrea held a small ice snowman. Darcy watched as Riley took the snowman from the twins and placed it inside the freezer next to a packet of peas and fish fingers.

‘What’s going on?’ she asked, opening the door and going in.

Straight away, Riley wobbled on the chair and had to grab the back rail. The twins rushed forward and crowded her and Tess screeched out, arms waving and gurgling.

‘Nothing, nothing,’ the twin chanted.

Darcy squeezed past them and picked up Tess as Riley slammed shut the freezer door.

‘Do I need a reason?’ she countered and tickled Tess, who burst into laughed. ‘So, what’s going on?’

‘Presents in the freeze?’

Darcy pulled a face and fixed her son with an I don’t believe you look. Meanwhile, the twins had dart out of the backdoor and their excited voices drifted over. Though, their words couldn’t be made out. Putting Tess on her hip, Darcy made her way over to the door, but Riley jumped in front of her.

‘What we having for tea?’ he asked, quickly.

‘Pizza,’ she answered and tried to look out of the window.

‘Don’t you want to get changed and stuff?’

‘What’s going on outside?’ Darcy asked dropping her voice.

‘Nothing. Nothing. Here, let me have Tess,’ he said and held his arms out, ‘I’ll look after her. You should go and see Granny.’

Darcy pouted and reached out for the door handle. Riley grabbed it before she could. Swinging around, she marched to the freezer and pulled it open as Riley gasped behind her. Inside, the snowman stared back at her, it’s frozen features nicely sculptured.  Tapping it to one side, she saw another one behind it, though its face and scarf were different.

‘Where’s your father and grandpa?’ Darcy asked as she turned around, but the kitchen as empty. She heard Riley’s voice from the garden yell, ‘she knows!’

Closing the door, Darcy swapped Tess to her other hip and went to the door. Standing in the door way she looked into the garden light up by the security lights and saw her husband, father and other children gathered around blocks of ice. The adults were holding tools and looked full engaged in listening to the children. Darcy noticed that the grass was covered in ice chippings that glistened in the light as the melted.

‘Hi, Honey! How was work?’ her husband called over.

‘Just…practising a little something,’ he replied.

‘Why are there snowmen in my freezer?’

The twins giggled and Riley looked stressed out.

‘Because it’s colder in there…maybe?’

Darcy felt a wave of frustration, ‘just what is going on? And I want to know right now!’

‘Well, darling,’ her father started, ‘the kids wanted to build snowmen, but you know there’s been no snow, so I thought we’d sculpt them some…’

‘Mummy, can we keep them? Dad said we could,’ Andrea and Alex said together, their words tumbling together to form one.

‘Where are we going to put them all?’ Darcy asked.

‘Look at this one!’ one of the twins said and they awed around a third ice snowman.

Shaking her head, Darcy stepped back and shut the door. From outside came the happy cries of the children. Placing, Tess in the high chair, Darcy suddenly remembered the bags in the hallway and hurried to hide them.