The new traffic light was working just fine but the builders were puzzled by the request to place it in in the middle of the plains where antelope grazed and lions watched them from a distance.

(Inspired by; https://mindlovemiserysmenagerie.wordpress.com/2019/12/17/photo-challenge-294/ with thanks).

Anomaly; something that deviates from what is standard, normal, or expected.

What was that thing in the sky? Dream paused and stared harder across the vast, empty landscape. Against the pale blue sky was a beam of multicolored light. She frowned then pulled out her telescope from her belt and had a closer look. Still though, she could make out nothing further, but the colors looked brighter now.

‘What is that?’ she spoke aloud.

‘Your big butt!’ a voice shouted at her.

Dream rolled her eyes and tutted. Putting the telescope away, she twisted her head, so she was looking back down the ladder. A glow of light showed the way and at the bottom waiting was a figure grinning up at her. Dream snatched a small rock from the surface and dropped it down.

Swallowing a laugh, Dream pulled herself out of the pipe and climbed down. Her feet hit the sand and rose a dust cloud around her. Making sure her mask and goggles were secure, she began walking in the direction of the strange light beam.

Minutes later, she was joined by a tall, red haired young man. He punched her in the shoulder then raced off. Dream stopped and rubbed the spot, though her leather padded jacket had taken much of the impact. Muttering revenge, Dream watched him slow down as he saw the thing in the sky too.

‘What do you think that is?’ he called over his shoulder.

‘No idea, Link,’ she replied, ‘I was on my way to check it out when you interrupted me,’ Dream answered.

Dream stormed passed him, trying not to hit him as she went. He came to her side moments later and in a awe silence, they walked towards the beam of colors. The landscape rose and fall around them, the yellow sand all that could be seen for miles. The only sound was their footsteps and the wind shifting the fine grains against each other.

‘We’re never going to get there!’ Link broke in after awhile.

Dream came to a stop on top of a large dune and looked across at the beam. She could see it better now, but it seemed to be fading.  The colors were arching up from the ground to the sky were they disappeared into the blue.

‘It looks like a path into the sky,’ she mused.

‘You go back if you want. I’m going to find where it meets the ground,’ Dream responded.

Dream didn’t reply, but walked off. The loose sand give way under her and she half skidded down the side of the dune. At the bottom, she found her feet and carried on walking. From behind her came the sound of Link half running half tumbling to join her.

She ignored him and picked up her pace. Breaking into a jog, she went around another dune and found herself in a maze of sand hills. Taking in a few deep breaths, she scrambled up the first one and looked down.

There below her was the source of the multi-colored light beam. Thanking her luck, she went down and towards it.

‘Dream! Where are you!’ Link yelled.

‘Over here!’ she shouted back, ‘I’ve found it. It’s some kind of crystal!’

Dream knelt down and looked closely at the clear cut rock that was half buried in the ground. Beams of light were shinning off it as the sunlight was touching it. Dream slowly reached out to touch it.

‘Don’t!’ Link gasped as he came to join her.

She looked at him, but couldn’t fully read his expression behind his mask.

‘It’s just a crystal. Like the ones you dig up all the time,’ she said.

‘It might be from the World Before. We shouldn’t touch it. We know what it is now, let’s go,’ Link spoke.

Dream looked at the crystal, tempted by it’s beauty. Link was right though.

‘It could be important,’ she thought aloud, ‘and if we leave it, it might not be here later.’

Dream shrugged and put her gloved hand onto of the crystal. The beam of light disappeared. Dream curled her fingers around the rock and picked it up. It was smaller and lighter then it had looked. She opened her hand and straight away the colors came back and danced around the surface of the crystal.

‘Can we go now?’ Link demanded.

Dream closed her fingers over the crystal again and got up,’sure. Maybe someone back home will know what this is,’ she added.

Story inspired by Sue’s prompt at https://scvincent.com/2016/11/03/thursday-photo-prompt-anomaly-writephoto/ – click to read the other stories. 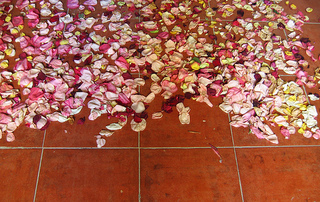 There were petals on the floor. I stopped with my front door key still in the door and my fingers clutching my keychain. The petals were red, pink and white though they were already turning brown at the edges. They looked too small to be rose petals, but not knowing the names of flowers, I couldn’t guess any further.

I took my key from the lock, dropped my arm to my side and stepped in. There was no arrangement to the petals, they were just there in a pile as if a bunch of flowers had suddenly dropped them. I closed my single apartment door and slipped my leather satchel off. Putting my keys in the wooden bowl on the tall side table, I sidestepped the petals and went into the living room.

I searched all four rooms of my apartment, but found nothing out of place. I change out of my suit, putting on much more comforting and warmer clothes. Going back into the hallway, I knelt down and inspected the petals. There was nothing to them, though they did have a faint flower smell to them. They were soft and buttery against my fingers. I picked up a handful and tried to figure out how many there were. About four handfuls, I came up with.

I looked at my letter slot and wondered if someone had posted them through. It was possible, but why? There was no note and none of my friends would do something like this. Shaking my head, I gathered them all up in two hands and carried the petals to the kitchen bin. I dropping them in, I rubbed my hands together then had to wash them because my skin felt oily.

Where had they come from? I wondered as I washed.

No answer ever came.

It was surreal, but there they were drifting under a night sky filled with the most wondrous activity from the stars and planets. The water lapped at the side of their boat and in the silence that was all they could hear. Mother lent on the bent wooden pole and tried not to weep. Her children transfixed by the light display above them had dried tears still on their faces. Gently, Mother steered them down the river that had once been the Nile, but was now known as the Nilegy Sea.

‘Father would have loved this!’ the youngest called out.

‘Yes, yes he would,’ Mother replied sadly and looked down at her husband’s hollowed out back.

(Inspired by; painting by Leonora Carrington entitled How Doth the Little Crocodile 1998)