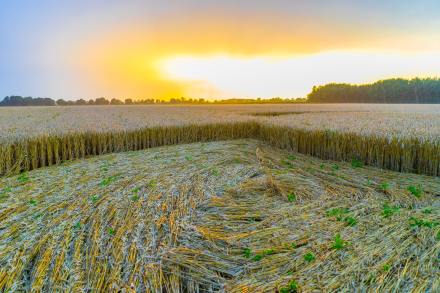 Cereology – the study of investigation of crop circles

It was definitely aliens this time, I could swear to it. The crop circle was huge and spread across two fields of corn, most of which had been flattened. The plants hadn’t just been laid flat though, there were shapes within the main ones. The corn lay in almost a spiral pattern, some going one way then the next patch going the opposite.

I glanced back at the farmer who had called me into inspect this weirdness. He was stood against the open gate to the field, scratching his head under his flat cap whilst his three boarder collie dogs paced around him, eager to get back to work.

There was no way he could have done this. It was too big, too complex and why would he want to ruin a crop that was a month away from being harvested? No, it didn’t make sense for him to have done this….

I looked at my clipboard again and made some more notes. I took some more photos then went over to the farmer. He was petting one of the dogs and talking to her.

‘Do you have a ladder or something I can get a higher photo with? I’d love to try and see this thing fully,’ I asked.

The farmer mumbled something in his thick Yorkshire accent which I could hardly understand and walked away. I hoped he was going to get a ladder and hadn’t decided I was crazy. Though, he like everyone else, except those of The Fellowship of the Outer Finders Orbit (FUFO) thought I was mad, so what did it matter?

Minutes passed, I re-read my notes, made a few more, walked around bit and then the farmer and another man appeared with the ladder. The dogs were running around and barking but once they realised they were back at a sheep free field again, they calmed down.

The farmer spoke and I guess he was introducing me to his son and also where were they to put the ladder?

I pointed to the corner of the field and we went over.

Once up the ladder, I could see the crop circle in all its glory. God it was beautiful! There was circles of all kinds joining together to make what had to be the base of a space craft. I took a few photos then had to change the film in the camera.

‘Let’s move the ladder over there,’ I said.

For maybe a hour or so, we moved the ladder around and I climbed up and took photos of the different view. Finally, we returned to the gate and the ladder was laid against a hedge.

‘You sure you didn’t hear or see anything?’ I asked.

‘They must have been cloaked,’ I muttered to myself, ‘I wonder what they wanted….Any cattle or other animals gone missing?’

I frowned and took that to mean he didn’t know. Was there any point in asking if he could go and check? I shook my head.

‘Yes. I think so. If anything else happens, call me again.’

‘Theerz nowt s’queer as folk,’ the son said in a low voice.

I frowned but before I could ask what he meant, the farmer spoke, ‘tek n’gorm.’

God, I should have brought a translator!

‘Er no, I’m driving. Thanks anyway. I should be going actually. It was nice to meet you. Thanks,’ I said and shook both their hands, ‘goodbye.’

I nodded and left the two men talking to each other. I guessed they were discussing me, probably insulting me but I had no idea. I walked back to my car, parked almost in a ditch in the courtyard of the farm.

Once back in my car, I felt strangely safer as if I had just escaped from an alien encounter.

I sipped some warm water and took a some deep breaths of hot, stale air. I started the car and put down the window. I glanced at the collection of papers and camera films I had dumped on the passenger seat.

‘Unbelievable evidence though, wait to the FUFO sees this!’ I spoke.